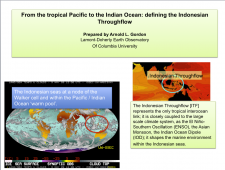 The transfer of tropical water from the Pacific to the Indian Ocean through the Indonesian seas, the so called Indonesian Throughflow, is considered to be a first order factor in the heat and freshwater inventories of these oceans, and as such are linked by sea-air fluxes to the larger scale climate system specifically to El Niño-Southern Oscillation (ENSO), the Asian Monsoon, the Indian Ocean Dipole (IOD). The interocean exchange within the multiple passages of the Indonesian seas is a challenge to observe as well as to simulate accurately within numerical models. As the Pacific water flows through the complex array of channels and seas of the Indonesian archipelago, the stratification is altered by sea-air heat and freshwater fluxes and by vigorous tidal induced mixing. What is exported into the Indian Ocean is a unique water mass.

The Indonesian Sea research led by Prof A. L. Gordon began in 1991, and continued in 1993-98 as the ARLINDO program, and 2004-2006 as the INSTANT program, and continues today with monitoring the Indonesian Throughflow channeled within Makassar Strait, which carries ~80% of the total ITF inflow from the Pacific Ocean.

In the past, the main throughflow passages have been measured over different years and for varied lengths of time, making it impossible to assemble a reliable synoptic picture of the ITF. Is the ITF transport pattern as shown in Figure 1 faithful to the climatic (long-term) patterns or simply reflecting “noise” due to higher frequency variability? The International Nusantara Stratification and Transport (INSTANT) program was established to directly measure the depth dependent ITF from the intake of Pacific water at Makassar Strait and Lifamatola Passage, to the Nusa Tenggara exit channels into the Indian Ocean. The collective merit of the INSTANT program over prior measurements of the ITF is the simultaneous, multi-year measurements in all the major inflow and outflow passages. This was only possible by the coordinated effort of an international group of researchers, working in collaboration with Indonesian colleagues. Each had specific responsibilities: United States: Makassar Strait; Lombok, Ombai Straits; The Netherlands: Lifamatola Strait; Australia and France: Timor Passage; Indonesia: CTD observations and ship support.