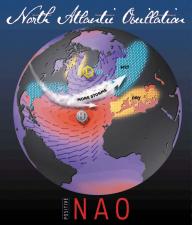 Introduction to the North Atlantic Oscillation, the most significant climate phenomena in the northern hemisphere.

The climate of the Atlantic sector and surrounding continents exhibits considerable variability on a wide range of time scales. Improved understanding of this variability is essential to assess the likely range of future climate fluctuations and the extent to which these fluctuations are predictable, and to assess the potential impact of climate change due to anthropogenic forcing.

A substantial portion of the climate variability over the Atlantic basin is associated with the NAO, which is a dominant pattern of atmospheric circulation variability. The NAO refers to a meridional oscillation in atmospheric mass with centers of action near Iceland and over the subtropical Atlantic from the Azores across the Iberian Peninsula. When the NAO is in its positive phase, low pressure anomalies over the Icelandic region and throughout the Arctic combine with high-pressure anomalies across the subtropical Atlantic to produce stronger-than-average westerlies across middle latitudes. This phase of the oscillation is, consequently, associated with cold conditions over the northwest Atlantic and warm weather over Europe, as well as wet conditions from Iceland through Scandinavia and dry conditions over southern Europe. This pattern of climate anomalies, which has been recognized at least since Walker and Bliss (1932), is most pronounced during winter when atmospheric teleconnection patterns such as the NAO are strongest.