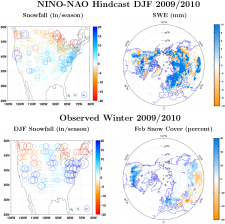 Writing in July 2010 when the eastern U.S. has been having one heat wave after another, it is easy to forget the winter just past, but winter 2009/10 was one of record snow in much of the mid-Atlantic region and very cold conditions across eastern North America. There was also widespread cold and snow in northwestern Europe.  At the time, as record snowfall hit Washington D.C., this was a big deal much exploited by climate deniers and others to ridicule global warming and climate science. Of course that confused climate and weather and took a rather regional perspective - failing, for example, to note the lack of snow in the Pacific Northwest or the warm temperatures in the subpolar and polar regions. Nonetheless it is always a good idea to try to explain anomalous seasonal weather both to search for any predictability and also to educate the wider public about causes and to offset attempts to exploit weather events to derail efforts to tackle climate change.