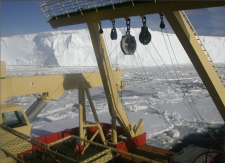 The ring of deep water around Antarctica not only links the major ocean [Atlantic/Pacific/Indian] , but also produces dense waters along the continental margins of the frozen continent, which sinks to the deep sea floor as Antarctic Bottom Water to spreads northward to form one of the two global ocean overturning cells [the other being driven in the northern North Atlantic]. Additionally, the contact of ocean at the edges of the glacial ice and at the base of floating segments of the glacial ice, is considered as a key factor in the glacial ice balance, which as our climate warms, is becoming less stable.

Professor A.L.Gordon has been investigating the oceanography of the Southern Ocean since 1965. The research includes all aspects of the polar ocean environment: the Antarctic Circumpolar Current with its fronts and formation of Antarctic Intermediate Water [which spreads near 1000 m depth below the thermocline of the southern hemisphere]; the sea-air-ice exchange processes along the continental margin and associated formation rates of Antarctic Bottom Water. This work has been carried out in the Weddell Sea, Ross Sea and along the margins south of Australia.