The primary purpose of this upcoming research cruise is to use seismic reflection and refraction data to better understand the Alaska-Aleutian subduction zone off southern Alaska, which produces large and destructive earthquakes.

Scientists will use the data to 1) estimate the size of the seismogenic zone, the part of the fault that generates earthquakes, and 2) provide critical information on how the properties of the seismogenic zone change along the subduction zone such that some areas produce large earthquakes and others do not.
The scientists involved are from the Lamont-Doherty Earth Observatory, part of Columbia University, and Dalhousie University in Nova Scotia, Canada. The cruise is scheduled to begin June 28, 2011 and end on or around August 4, 2011. 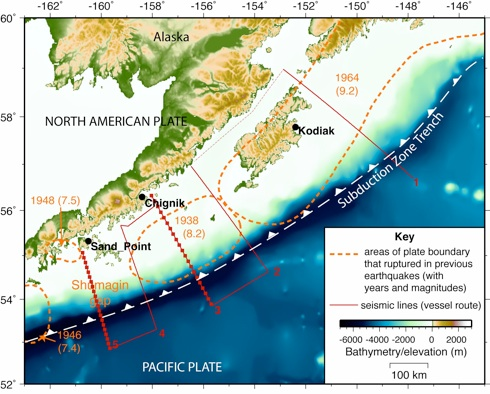 This study focuses on the Semidi segment, whose earthquake recurrence interval is estimated to be ~50-75 yrs and which last ruptured in 1938. To meet the scientific and societal objectives, it is absolutely necessary that our lines extend close to the coastline to fully capture the full extent of the seismogenic zone and the transition to stable sliding.
Subduction zones are plate tectonic boundaries where two plates converge, and one plate is thrust beneath the other. This process results in geohazards such as earthquakes and volcanoes that affect millions of people around the world, particularly around the edges of the Pacific Ocean, which is surrounded on nearly all sides by subduction zones. The largest earthquakes on Earth occur at the interface between the two plates, called the megathrust. Ground-shaking associated with these earthquakes threatens humans directly by causing collapse of buildings and other infrastructure. Major population centers in the northwest U.S. and Japan are examples of the regions that face seismic risk from subduction zones. Furthermore, such earthquakes can cause tsunamis and other deadly side effects, as seen following the earthquake in the Indonesian subduction zone in 2004 that resulted in 300,000 deaths, and the earthquake off of north Japan in March 2011, which caused many deaths and damage to infrastructure, such as nuclear plants. 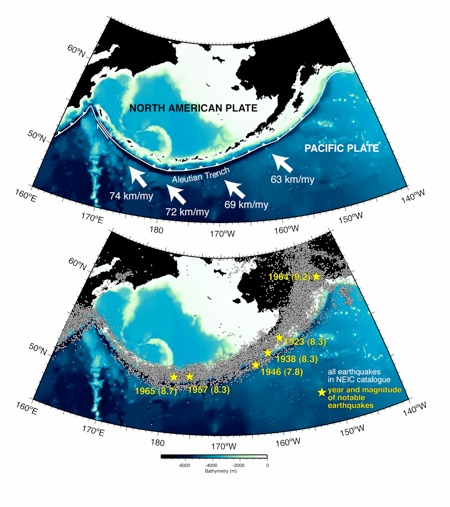 Above: The Alaska/Aleutian subduction zone in the northern Pacific Ocean. The Pacific plate is being thrust beneath the North American plate at a rate of ~6-7 cm (or 2-3 inch) per year. Rates above given in kilometers per million years. Below: Many earthquakes occur along this boundary, both on the contact between the plates and in the overriding North American plate. These include great earthquakes (yellow stars) such as the magnitude 9.2 Good Friday earthquake in Prince William sound..

Earthquakes are caused by movement over a finite area of the plate interface called the seismogenic zone. Stress builds up in this zone and is released catastrophically in one or more earthquakes. Above and below this area, stress cannot build up, and the movement between the plates occurs smoothly through time and thus does not produce earthquakes. To improve our estimates of the likely damage that will be associated with an earthquake in a given location, we require better constraints on the size of the seismogenic zone, particularly the location of the lower limit. Recent studies have suggested that seismic reflection and refraction data (such as those collected by the R/V Langseth) might provide a means of mapping the extent of the seismogenic zone as well as providing critical new information on how the properties of the seismogenic zone change along the subduction zone such that some areas produce large earthquakes and others do not.

The megathrust in the east Aleutian-Alaska subduction zone provides an ideal laboratory in which to test the ability of seismic reflection and refraction data to characterize the seismogenic zone. 1) The earthquake history of this subduction zone is well known due to the relatively short recurrence rate of earthquakes (e.g., ~50-75 years in some places as compared to >300 years beneath the northwest U.S.). 2) Furthermore, unlike many other subduction zones, the landward edge of the seismogenic zone lies offshore, allowing us to study it with relatively inexpensive marine MCS reflection profiling. Our study will focus on the Semidi segment of the Alaska-Aleutian subduction zone; 71 years have passed since the 1938 earthquake, and the average megathrust repeat times for this zone appear to be 50 to 75 years, making it a highly relevant locality for further study.
To conduct the research, scientists will use low-frequency sound waves to image earth's crust and parts of the underlying mantle. Air guns towed by the ship emit pulses of sound that travel through the earth’s crust. These sounds are recorded on seafloor instruments, and the data is translated into a picture of the material that lies beneath the seafloor, much like a medical image of the human body.  The expedition was carefully scheduled within the possible weather window for this region that would have the least possible effects on marine mammals, local fishers /hunters and the environment. The region of investigation is not a source of oil or gas, and this expedition is in no way aimed at exploring for oil or gas.
The Langseth is operated in accordance with rules and regulations set forth by the U.S. Marine Mammal Protection Act, Endangered Species Act and National Environmental Policy Act, and receives permits reviewed and approved by fisheries biologists and endangered species experts with the U.S. National Marine Fisheries Service, part of the National Oceanic Atmospheric Administration.
For more information about the study related to this research cruise, please contact:
Researchers at:
The Lamont-Doherty Earth Observatory
Donna Shillington +1 845 365 8818 djs@ldeo.columbia.edu
Dalhousie University
Mladen Nedimovic +1 902 494 4524 mladen @ dal.ca  mladen @ ldeo.columbia.edu
‹ Office of Marine Operations up Cascadia Open-Access Seismic Transects ›