Mission Overview:
Subduction zones, where two tectonic plates collide,  produce some the world's most devastating earthquakes and tsunamis, volcanic eruptions, and landslides. As one tectonic plate descends beneath the other, water stored within the descending plate is released and is believed to play an important role in these subduction-related phenomena. Despite the importance of water bound in oceanic plates for subduction processes, little is known about the extent and distribution of hydration, and how the state of hydration of the descending slab contributes to earthquake hazards and formation of arc volcanism at different subduction zones. Our study is designed to test the hypothesis that the Juan de Fuca plate is significantly hydrated prior to subduction at the Cascadia trench, transporting water into the subduction zone, and contributing to along-strike variations in structure and intraplate seismicity along the heavily populated Pacific northwest margin. Our experiment involves acquisition of active source seismic data (Multi-Channel Seismic (MCS) and Ocean Bottom Seismometer (OBS) data) along 3 transects of the Juan de Fuca plate, offshore Washington state to the Endeavour Ridge, offshore Oregon to Axial Volcano, and along the Cascadia trench ~ 100 km offshore.
Blog:
http://www.ldeo.columbia.edu/research/blogs/cascadia-in-motion 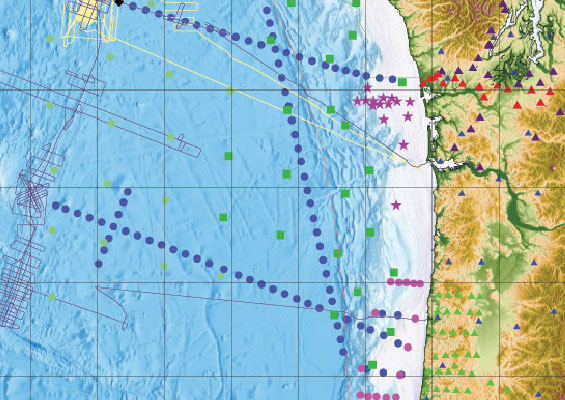