>>Click here to view the Science Support Plan for this cruise.

The world’s most powerful earthquakes and tsunamis are generated at subduction zones, regions where one tectonic plate slides beneath the other as it slips into Earth’s mantle. Subduction-zone earthquakes are typically generated at depths between 5 and 100 kilometers below the surface, making studies of the conditions that control the accumulation and release of energy during an earthquake extremely difficult. However, we can investigate these inaccessible regions with remote techniques that use highly sophisticated seismic techniques designed to image the subsurface in high detail and reveal critical information on physical conditions of the rocks below. In April and May 2011 a team of scientists from the University of Texas, University of California at Santa Cruz, and ICREA (Institució Catalana de Recerca i Estudis Avançats) at the Spanish National Research Council in Barcelona, Spain conducted a detailed seismic reflection survey off the Pacific coast of Costa Rica, focused on the structure and material properties of the two colliding plates there. 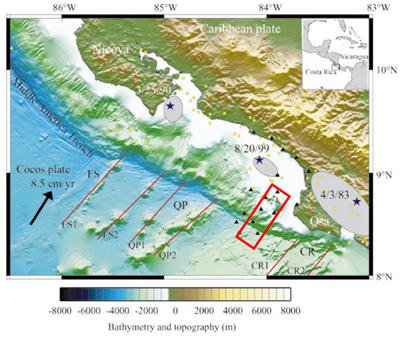 Topographic and bathymetric map of the Costa Rica subduction zone margin showing the location of the CRISP 3D seismic survey and drilling project (red box). Epicenters of recent earthquakes are shown with stars and sip areas are shown with gray shading. Convergence direction and rate indicated by the arrow.
The Pacific margin of Central America is a subduction zone that regularly generates large destructive earthquakes and tsunamis—part of the so-called “Ring of Fire” that rims the Pacific. Regular earthquakes roughly every 10 years of magnitude 6 to 7.5 strike along this segment due to the interaction of the Cocos plate subducting beneath the Caribbean plate. The Costa Rica margin is an ideal location to look at what we call megathrusts—giant earthquake-generating faults--because earthquakes here occur at unusually shallow depths. This is partly because subduction along the Costa Rica margin has been grinding away and removing material from the upper (overriding) Caribbean plate. Perhaps more important, a ridge of thicker than normal crust on the Cocos plate is subducting in the study area, which elevates the subducting and overriding plates and helps make the earthquake zone unusually shallow. Typically, the shallowest subduction thrust earthquakes are more than 7 kilometers below the seafloor. In southern Costa Rica, they are as shallow as 5 kilometers. This makes it considerably easier for us to seismically image their source areas, and potentially reach this zone with drilling some time in the future.
The scientific objectives of the proposed survey, which were evaluated through standard National Science Foundation (NSF) merit review processes, require the use of 3D seismic equipment. This type of data collection is made with seismic equipment onboard the R/V Marcus G Langseth, the primary seismic vessel in the U.S. academic research fleet, and the only one capable of 3D multi­channel seismic data collection.

Cross-section of the Costa Rica subduction zone. Gray is the subducting Cocos plate lithosphere and green is the overriding crust of Central America. The line along the base of the continental basement (green) is the plate-boundary fault. The thick red zone marks the portion of the fault that accumulates large stress that is released in major earthquakes. The 3D seismic imaging and the drilling are both targeting the plate-boundary fault from the trench to the seismogenic zone.
In April, the Langseth departed from Puerto Caldera, Costa Rica, with 11 scientists, and about two dozen other crew members to begin its survey. For six weeks, the vessel released regular bursts of compressed air into the water behind the ship to send acoustic signals more than 10 kilometers into the crust. Signals reflected from rock structures beneath the seafloor were received on four arrays of microphones, each of which have 480 highly sensitive receivers extending 6,000 meters behind the vessel. With this system we covered an area of 11 kilometers by 55 kilometers, with resolution of a few tens of meters.
Over the next three to five years following the cruise, high-performance computers will be used to reconstruct detailed 3D images of the subsurface structures. These images are expected to show the geometry of faults involved in generating large earthquakes and reveal new faults that reflect the stresses developing during plate subduction. The data will also reveal the physical properties of the rocks that develop within the fault zone. These data will tell us where and how stress is accumulating in the period building up to an earthquake, and which areas are prone to releasing their stored energy in the near future. These results will be critical for understanding how subduction zone earthquakes are generated offshore Costa Rica, but more significantly it will constrain global models of earthquake rupture for subduction megathrust earthquakes for a better understanding of these deadly and destructive natural phenomenon.
In designing this proposed seismic survey, Lamont-Doherty Earth Observatory has considered potential environmental impacts including seasonal, biological, and weather factors. Part of the considerations was whether the research objectives could be met with a smaller source than the ship’s full 36-airgun, 6,600 cubi-inch array. It was decided that the scientific objectives could be met using two 18-airgun arrays operating in alternating mode, and towed at a water depth of 7 meters.  Thus, the source volume did not exceed 3,300 cubic inches at any time.  Another important consideration was seasonal environ­mental conditions; the chief scientist for the expedition worked with LDEO and NSF to identify potential time periods for the survey, taking into consideration key factors such the seasonal presence of marine mammals and sea turtles. After considering these factors, along with weather conditions, equipment availability, and other potential 2011 R/V Langseth surveys, the April–May time frame was selected as the optimum survey time.  Lamont has obtained official permission from the Costa Rican government to carry out this offshore survey. The ship carries five trained protected-species observers.
‹ Computers and Communications up Cruise Planning ›