The R/V Marcus G. Langseth  is the only UNOLS vessel equipped to carry out marine multichannel seismological research. The R/V Langseth is able to deploy multiple hydrophone arrays and linear sound source air gun arrays, which improve the quality and reliability of data acquisition, as well as enhanced general-purpose capacity, such as wireline coring, OBS deployment/recovery, and ROV operations in support of a wide range of marine science programs in locations around the world. 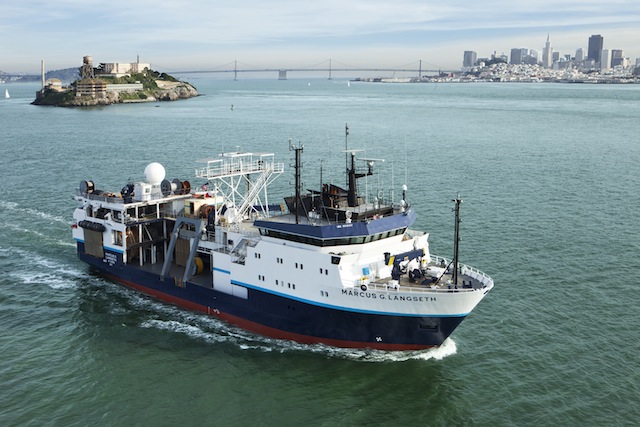 Scientific cruises in the 2011 operating year included 5 cruises, totaling about 250 operating days.  Surveys varied in the Pacific Ocean from the coast of Costa Rica (N Bangs, PI), the Gulf of Alaska and Bering Sea (USGS), the Alaska Peninsula (D Shillington, PI), and to the Chukchi Sea (B Coakley, PI).  More than 13,000 km of 2D seismic images were collected, in addition to the 3D seismic survey, as well as vast amounts of other oceanographic data.  The vessel reached its northernmost operating point ever, going well above the Arctic Circle (76.5 degrees N).   More information about the 2011 cruises .
In 2012, the Langseth totaled 208 operational days for 7 cruises - 5 seismic, 1 coring, and 1 ROV  - all in the Pacific Ocean.  LDEO managed a major re-outfitting of the Langseth for its first-ever coring cruise in the Line Islands (Lynch-Stieglitz, PI).  These expeditions demonstrate the ability of the Langseth to perform both specialized and general oceanographic research, as well as LDEO’s ability to be flexible and responsive to changing ship operations and scientific requirements as set by the NSF and the scientific community.   More information about the 2012 cruises .
The 2013 science schedule includes 2 seismic cruises and 1 geophysical cruise in the Atlantic Ocean.   More information about the 2013 cruises .
‹ Cruise Planning for Chief Scientists up 2011 Cruises ›