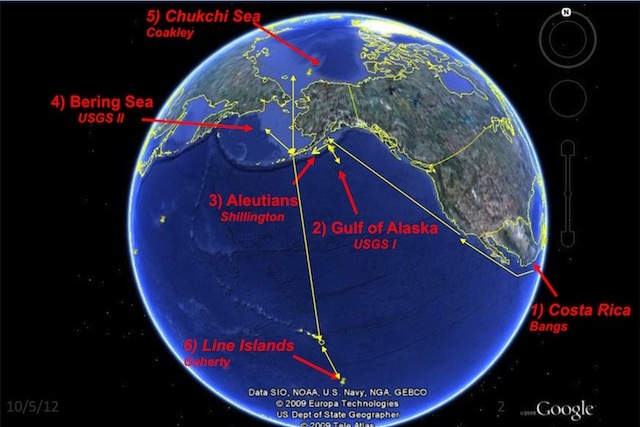 Costa Rica 3D Seismic Survey Project
The world’s most powerful earthquakes and tsunamis are generated at subduction zones, regions where one tectonic plate slides beneath the other as it slips into Earth’s mantle. Subduction-zone earthquakes are typically generated at depths between 5 and 100 kilometers below the surface, making studies of the conditions that control the accumulation and release of energy during an earthquake extremely difficult... Read more.
Extended Continental Shelf Project
The U.S. Extended Continental Shelf Task Force directs and coordinates the Extended Continental Shelf Project, an effort to delineate the U.S. continental shelf beyond 200 nautical miles. The process to determine the outer limits of the U.S. ECS requires the collection and analysis of data that describe the depth, shape, and geophysical characteristics of the seabed and sub-sea floor. The R/V Marcus G. Langseth spent the summer in the Bering Sea and the Gulf of Alaska collecting multichannel seismic reflection and refraction data. The missions focused on structures and processes that control the distribution of sediment, aspects that are important for delineating the extended continental shelf (ECS) using the sediment thickness formula. Read More.
Alaska/Aleutian Megathrust Project
The primary purpose of this research cruise is to use seismic reflection and refraction data to better understand the Alaska-Aleutian subduction zone off southern Alaska, which produces large and destructive earthquakes. Scientists will use the data to 1) estimate the size of the seismogenic zone, the part of the fault that generates earthquakes, and 2) provide critical information on how the properties of the seismogenic zone change along the subduction zone such that some areas produce large earthquakes and others do not. Read more.
Chukchi Edges Project
The primary purpose of this cruise is to collect Multi-Channel Seismic Reflection (MCS) data across the transition from the Chukchi Shelf to the Chukchi Borderland. These data serves two purposes;
1) By imaging the transition between these two continental blocks, we will constrain the history and timing of relative motion between them.
2) By collecting continuous MCS data from exploration wells drilled by Shell on the Chukchi shelf in the late 80ʼs, following the thickest sediment section, we will be able to establish the time stratigraphy along our profiles and other profiles we cross.... Read more.
NoMelt: Structure and Evolution of the Oceanic Lithosphere / Asthenosphere System
What is a plate? This question is central to our understanding of global geodynamics and plate tectonics, but our knowledge of basic lithospheric properties in even very simple geological regions is poor. In December 2011, we initiated a comprehensive data-collection and analysis effort designed to significantly advance our understanding of the structure and evolution of oceanic plates. Using this research vessel, we will combine an active-source seismic refraction experiment, a passive-source broadband ocean-bottom seismometer deployment, and a seafloor magneto-telluric experiment to characterize a swath of mature Pacific lithosphere in unprecedented detail. Read more.
‹ Cruises up 2012 Cruises ›