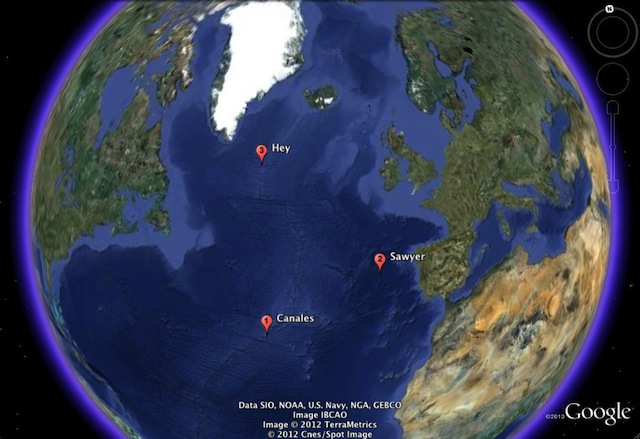 Seismic Investigation of the Rainbow Hydrothermal Field and its Tectono/Magmatic Setting at the Mid-Atlantic Ridge 36° 14’N . The proposed survey area is South of Azores on the Mid-Atlantic Ridge as shown in figure above . This project proposes to conduct a multi-scale seismic investigation of the tectono/magmatic setting of the Rainbow hydrothermal field, located within a non- transform discontinuity of the Mid-Atlantic Ridge (36°14’N). The main goals are (1) to determine the nature, geometry, and location of the heat source driving high- temperature circulation at Rainbow; (2) to determine the structure and origin of the ultramafic massif that hosts the hydrothermal field; and (3) to image large (detachment) and small-scale faults and investigate how they link to the heat source and control hydrothermal fluid focusing and discharge. More information.

3D Seismic Study of the Galicia S Detachment in the Atlantic Ocean offshore Galicia, Spain. The proposed survey area is shown in the figure above . The goal of the proposed research is to collect data necessary to study the rifted continental to oceanic crust transition in the Deep Galicia Basin west of Spain. This margin and its conjugate are among the best studied magma-poor, rifted margins in the world, and the focus of studies has been the faulting mechanics and modification of the upper mantle associated with such margins. More information.
Thermal and Tectonic Hypotheses for North Atlantic Seafloor Spreading Geometry Reorganization is a multibeam and geophysical survey of southern end of Reykjanes Ridge and flanks near Bight Fracture Zone, offshore Iceland, Atlantic Ocean. The proposed survey area is shown in figure above . The project is a month-long marine geophysical expedition to collect the multibeam, magnetics & gravity data that would provide a definitive test between the fundamentally different thermal & tectonic hypotheses for exactly how the Iceland plume (or whatever form of mantle convection or heterogeneity creates Iceland) caused the reorganization of the Mid-Atlantic Ridge south of Iceland. The data will be collected along best-estimate flowline profiles & will be sufficiently closely spaced for three-dimensional analysis. More information.
‹ 2012 Cruises up Bight Reorganization Geophysics ›