The project is a month-long marine geophysical expedition to collect the multibeam, magnetics & gravity data that would provide a definitive test between the fundamentally different thermal & tectonic hypotheses for exactly how the Iceland plume (or whatever form of mantle convection or heterogeneity creates Iceland) caused the reorganization of the Mid-Atlantic Ridge south of Iceland. The data will be collected along best-estimate flowline profiles & will be sufficiently closely spaced for three-dimensional analysis. An important result of this test will be that modelers will either be confident that their thermal Reykjanes Ridge reorganization models are providing accurate information about Earth's behavior, or that they can confidently begin to model the correct mechanism instead. An additional benefit of this project will be the first accurate map of the Bight transform fault/fracture zone complex, known to be an important pathway for westward flow of North Atlantic mid-water circulation across the Reykjanes Ridge boundary (Bower et al., 2002), an important control on global climate change (Siedler et al., 2001).
Follow the expedition as the scientists blog from the ship. 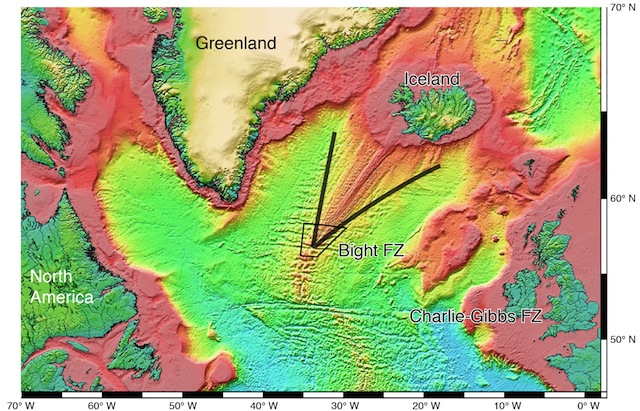