The primary purpose of this cruise is to collect Multi-Channel Seismic Reflection (MCS) data across the transition from the Chukchi Shelf to the Chukchi Borderland. These data will serve two purposes;

2) By collecting continuous MCS data from exploration wells drilled by Shell on the Chukchi shelf in the late 80ʼs, following the thickest sediment section, we will be able to establish the time stratigraphy along our profiles and other profiles we cross.

This project is supported by the Arctic Natural Sciences program at NSF with funding granted to the Geophysical Institute of the University of Alaska. Cruise participants are from Korea, Germany, Turkey, USA and the UK, representing seven different universities and research organizations.

We will sail on 6 September from Dutch Harbor and arrive in the survey area a few days later before the annual ice minimum is achieved. We will return to Dutch Harbor on 10 October.

Of particular interest is the use of RV Langseth, which is not ice reinforced, in the peripheral Arctic Ocean. If this year is similar to last five ice years, the entire survey area should be ice free when we arrive in early September. The success of the cruise depends heavily on our ability to understand the distribution of ice in the survey area and the advance of the ice edge as the sea surface begins to refreeze after mid- September. 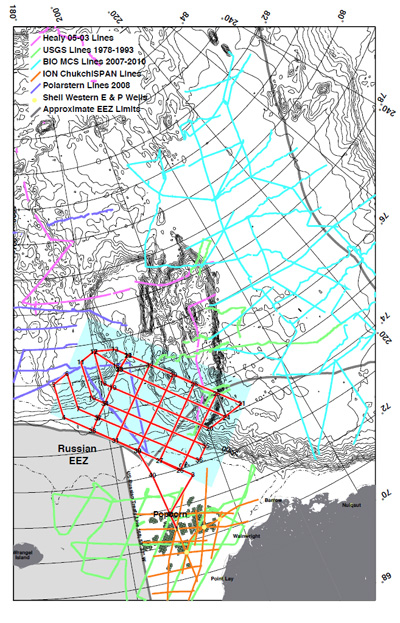 Figure 1 - Bathymetric map of the Chukchi Shelf and Borderland. Existing MCS data sets are annotated. Extensive data from the Beaufort Shelf, to the east, are not shown. Location of Shell exploration wells and lease blocks are also indicated. Planned MCS lines shown in red.

The geological history of the Amerasian Basin is poorly understood, in part due to the lack of identified plate boundaries. These boundaries must exist to explain the basin history. Identification of these structures will make it possible to reconstruct the development of the basin, which will substantially improve our understanding of the surrounding continents.

The Chukchi Borderland, a block of extended continental crust embedded in oceanic crust in the Canada Basin, figures prominently in all tectonic models proposed for the opening of the Amerasian Basin. The Chukchi cannot be obviously reconstructed to any of the nearby continental shelves. It is one piece that does not fit the commonly held “windshield wiper” model of Mesozoic opening of the Amerasia Basin.

According to the commonly accepted model, the Canada Basin opened like a pair of scissors. This was accomplished by a counter-clockwise rotation of the North Alaskan- Chukchi micro-plate (Arctic Alaska Plate) by 66 degrees. The micro-plate collided with the Siberian margin. Most of the existing models for the development of the Amerasian Basin accept the basic pattern of scissors-like or, classically, the “windshield wiper” opening for the basin. This theory finds some support in the identification of a possible relict mid-ocean ridge axis in the central Canada Basin. Since the continental Chukchi Borderland creates a space problem for any simple opening model, the greatest differences between models revolve around how to accommodate that block.

By imaging the transition from the shelf to the Borderland and the structures within the basin and developing age estimates for the stratigraphic reflectors it will be possible to estimate the age and orientation of motion across these structural boundaries, constraining relative motion among the various continental blocks in the survey area. This information will establish new constraints on the timing and distribution of deformation in the development of the Amerasia Basin and provide a test of the windshield wiper model of basin opening.

For more information about the study related to this research cruise, please contact: