Just like her illustrious big sister , Lamont’s second ship, the Robert D. Conrad , a new research vessel built by the Navy and given to the Observatory to operate in 1962, embarked on ambitious, near-continuous research missions from the very start. (She would eventually follow Vema as only the second ship in history to log more than one million nautical miles of oceanographic research.)

Using deep-sea seismic reflection equipment developed at Lamont, both research vessels conducted a worldwide mapping of the sediments accumulated on the ocean floors, while at the same time collecting magnetic, gravity and heat-flow data. This vast flow of information contributed enormously to our present understanding of oceans as youthful features, originating at the mid-ocean ridges by a process of intrusion of mantle rocks, followed by lateral displacement of the cooled crust—a process known as seafloor spreading. 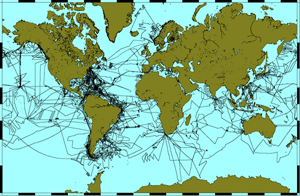 In addition to its manifold oceanographic, biological, geochemical, geological and geophysical work, the Conrad was notable in that she was equipped, starting in 1974, with tools for multichannel seismic (MCS) surveying. Starting with four airguns and a 2,400-meter-long, 24-channel hydrophone array, the equipment was over time systematically upgraded and improved: by the time she was returned to the Navy, in 1989, the Conrad ’'s MCS equipment consisted of ten airguns and a 4,000-meter-long, 160-channel hydrophone array. Over her 27 years of service to the Observatory, the Robert D. Conrad acquired 850 seismic profiles over the course of 35 different surveys.