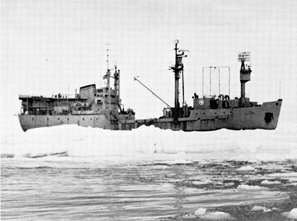 With a bridge low in the after part of the ship, the R/V Eltanin's enclosed ice tower was often used for spotting icebergs. (Cilck on photo for larger view.)

The USNS Eltanin was launched in 1957 as a noncommissioned Navy cargo ship with a special feature that would prove essential to scientists: she was built with an ice-capable, double hull, and officially classified as an Ice-Breaking Cargo Ship. In August of 1962, she was refitted to perform research in the Southern Ocean and reclassified an Oceanographic Research Vessel (T-AGOR-8)—in fact, Eltanin was one of the world’s first Antarctic research ships.

Lamont Geological Observatory (as it was known at the time) was selected to install, and initially to maintain equipment for underway geophysical measurements, including precision depth sounding, gravity, magnetics, and seismic reflection profiling. But Eltanin’s missions were not limited to geophysical work: physical, biological and geological groups, several from Lamont, participated in many of her cruises, occupying more than 1,500 “hydro stations” and making vertical profiles of temperature, salinity, dissolved oxygen and other parameters. The oceanographers also made thousands of bathythermograph casts, took numerous bottom photographs and made measurements of light scattering and ocean currents. 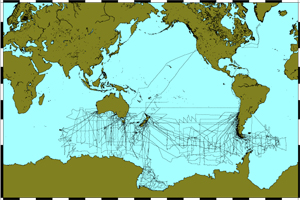 (All of this work was supported by the National Science Foundation's Division of Polar Programs.) In the period between 1962 and 1975, scientists and technicians aboard Eltanin logged and archived data along 420,000 nautical miles of track, extending from the Atlantic westward into the central Indian Ocean, between 40° and Antarctica.

In 1975, Eltanin was transferred to the Argentine Navy and renamed Islas Orcadas. She would continue to cruise the South Atlantic sector for several years, often with Lamont science projects aboard.