What We Learn from the Oceans Using Soundwaves 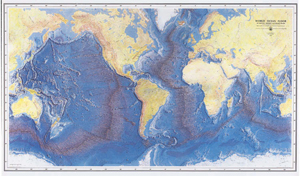 Acoustic and seismic research has contributed more to understanding Earth’s physical history, natural hazard potential, and climate systems than perhaps all other scientific technology combined. It gives scientists the ability to map the ocean floor, a tool that revolutionized earth sciences 50 years ago with the discovery that continents break apart and tectonic plates shift. It revealed the globe-encircling volcanic mid-ocean ridge system, earthquake-producing boundaries of crustal plates, drowned shorelines, and submarine landslide deposits.

The deep interior of the oceans is as difficult for man to reach as is deep space. The opaqueness of seawater to the passage of light or radio waves makes it difficult to efficiently study the seafloor or the deep interior of the oceans with either optical methods (cameras, etc), or with radar or microwave radiation (such as used in satellites). Sound, however, travels freely through the oceans and can be used to measure topography and to map geology, ocean temperatures, and currents.

Today, marine acoustic surveys are fundamental tools guiding explorations of this planet. Numerous scientific research vessels from around the world are engaged in studying all of the Earth’s oceans and the underlying seafloor. The data that is being collected is critical to informed decision making regarding our future. 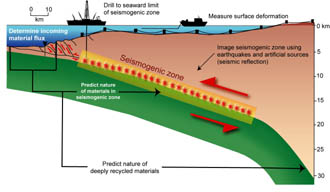 Processes in subduction zones need to be better understood in order to more accurately predict and calculate earthquake risks near such areas. Image: Olaf Svenningden, MARGINS

Continental margins provide the Earth's principal concentration of hydrocarbon and mineral resources, earthquakes, landslides, and volcanic and climatic hazards. They are also the regions containing the greatest human population density. Despite the societal and economic importance of margins, many of the mechanical, fluid, chemical, and biological processes that shape them are poorly understood. Scientists are using acoustic data to create maps of submerged continental margins around the globe, to reconstruct the history of ocean evolution, to understand the processes involved in creating zones of enormous earthquake and volcanic activity, and to help predict when and where future movements of the Earth will occur. 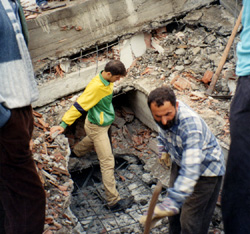 >Throughout its history, Turkey, which lies above a seismically active plate boundary, has suffered enormous consequences from high magnitude earthquakes. In two 1999 earthquakes, tens of thousands of lives were lost throughout a 100-mile-long corridor including Istanbul and regions to its east. Much of the infrastructure was flattened, including the structure seen here.
Photograph: Leonardo Seeber

From sub-seafloor imaging, scientists can compile records of the timing and magnitude of historical earthquakes. Dating these earthquakes can inform us of the time intervals that occurred between quakes, and potentially signal the next one. Research in the Marmara Sea examined numerous earthquakes from the Northern Anatolian Fault. One of these quakes killed nearly 20,000 people in Istanbul, Turkey in August 1999. Marine research led scientists to conclude that another event was likely to strike the same region. Based on the resulting scientific report, engineers closed school buildings that had been only slightly damaged in this August earthquake. Three months later, the predicted earthquake did strike and flattened several buildings. Similar research is now taking place off the coast of Seattle, Washington, where a long history of major earthquake activity has been documented. 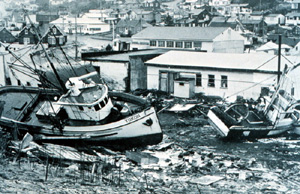 Tsunamis are devastating to coastal towns, which are typically the most populated regions of a country. In 1963, a deadly tsunami overtook the shores of Kodiak, Alaska, with such force that fishing boats were catapulted onto land.

In 1998, over 2,000 lives were lost when an earthquake-generated submarine landslide caused a tsunami along the coast of northern Papua New Guinea, a region known to be seismically active. To understand the dynamics of the events that created these deadly waves, researchers aboard the R/V Maurice Ewing used acoustic technology to map the ocean floor landscape. These maps are being applied to wave studies to understand the forces that generate such deadly tsunamis, which can occur in many coastal regions around the globe. A scientifically based understanding of the potential for natural disasters is indispensable for regional planners charged with developing appropriate disaster response measures in populated areas.

Through underwater mapping of the ocean floor around the Hawaiian Islands, researchers discovered that over time, enormous chunks of land have broken away, sliding into the ocean, possibly causing massive tsunamis. Our understanding of the history of land change in this region can be used to forecast and plan for future inevitable natural hazards.

Researchers mapping the underwater landscape around Cape Cod and Nantucket discovered excessive scour marks along the ocean floor, resulting from the fishing industries use of dragnets. These findings have informed the controversy of over-harvesting this region of the ocean, which has seen critical declines in cod, haddock, and yellowtail flounder.

Marine acoustic surveys have pinpointed locations on the seafloor where natural gas seepages, some quite violent, have occurred. Accumulation of gas at shallow depths may cause large-scale collapses of continental margins. Knowledge of seepage locations is important, not only to regional planning, but also to the understanding of how new biological communities become established on the sea floor. Additionally, methane, a principal and abundant gas in these seepages, is a potent greenhouse gas implicated in climate change. Researchers are learning how to calculate gas quantities at seepage locations and use these numbers in climate change scenarios. Methane is also a potential future energy resource, although it is currently difficult to exploit.