Jun Korenaga--Yale University
Will Sager-- Texas A&M
Mission Overview:
"Shatsky Rise in the northwest Pacific is one of the gigantic oceanic plateaus, and has been chosen as a top-priority target given its unique tectonic setting such as the formation on the ridge-ridge-ridge triple junction during frequent magnetic polarity reversals. In the summer of 2010, a combined 2D MCS/OBS survey was conducted with R/V Marcus Langseth, and the OBS seismic refraction experiment was completed in full. About one third of the planned MCS reflection lines were, however, left for a future cruise, because the cruise was disrupted twice by medical diversions, each of which took about a week owing to the remoteness of the study area.
This cruise is to complete the left-over 2D MCS reflection lines, which cover from the northern part of Tamu Massif to Ori Massif within Shatsky Rise. These reflection data will be essential to delineate the tectonic evolution of the rise, which in turn is critical to relate the observed crustal structure to underlying mantle processes."
Blog:
http://lifeonshatsky.blogspot.com/ 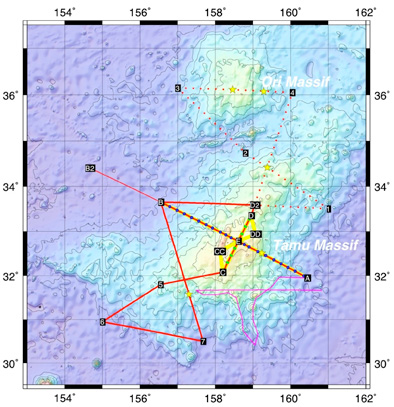 Map of seismic survey area for Shatsky Rise science cruise in NW Pacific Ocean. Solid line shows area of survey already completed over Tamu Massif in 2010. Solid lines with blue dots show locations of Ocean Bottom Seismometers that were deployed and recovered in 2010. Dotted lines to the NW over the Ori Massif will be completed in March-April, 2012.