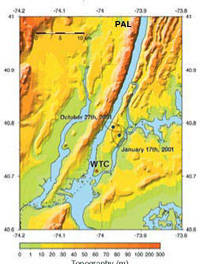 Pictured are three seismic events that occurred in Manhattan in 2001: two earthquakes on Jan. 17 and Oct. 27 (black dots) and the World Trade Center (WTC) collapse on Sept. 11 (red dot). These events were recorded at the seismographic station on the Lamont campus (PAL) approximately 34 km north, on the west bank of the Hudson. The dotted ellipses show areas of 95 percent certainty for the locations of the earthquake epicenters. Won-Young Kim is currently working to increase the accuracy of epicenter locations by deploying sensors at further sites throughout upper Manhattan. Illustration: Won-Young Kim

The staff and students who make up the Seismology, Geology and Tectonophysics (SG&T) Division are part of a long tradition in the solid earth sciences at Lamont. SG&T researchers are at the forefront of theoretical and observational seismology, solid earth dynamics, rock mechanics, structural geology and tectonics, and sedimentary geology, and are making lasting contributions to the study of earthquakes, the structure of the Earth’s crust, mantle, and core, and the large-scale motions and deformation of the tectonic plates. The breadth of our work includes theory, observation and computation. SG&T scientists also serve the nation and the world by pursuing applied research and providing advice to national and international organizations in two critical areas: reducing society's vulnerability to natural hazards, and verifying international treaties governing nuclear weapons testing.

In addition to its scientific research, the Division operates several facilities for the broader community. In partnership with the U.S. Geological Survey, Lamont operates a network of modern seismographs throughout the Northeast for monitoring earthquake activity and determining seismic risk. Our Ocean Bottom Seismology (OBS) Group manages a state-of-the-art research and development and production facility as part of the National Science Foundation’s OBS Instrument Pool. Our Crustal Deformation/GPS group operates the most northerly network of permanent GPS instruments in the Russian Arctic and Siberia, contributing in real time to the refinement of GPS satellite orbits as well as fulfilling a scientific mission. The Global Centroid-Moment-Tensor (CMT) Project, newly established at Lamont, provides accurate earthquake source mechanisms to government and academic researchers.

Many of our efforts are enriched by our research partnerships with scientific institutions and individual scientists, both in the U.S. and abroad. We are particularly proud of our track record in international cooperation, having a record of successful experiments on every continent. Each year, we host many visitors from abroad. These visits not only produce good science; they also generate lasting friendships that are the basis for cooperative research on the most interesting problems on (or in!) Earth.

Finally, we are proud to be a part of the metropolitan New York community. Our scientists and students reach out actively to our local schools, by providing resources and expertise in solid earth science. Our seismological network operations include partnerships with primary and secondary schools, two- and four-year colleges, museums, and local, regional and state emergency management agencies. And we are often called upon by local and national media for information on earthquakes, or opinions on recent advances in our science. Our public outreach and service to the nation are as much a part of our mission as is our basic research.

Welcome to SG&T! Please contact us for inquiries about student and staffing opportunities.

‹ Division of Seismology, Geology and Tectonophysics up Contact SG&T ›