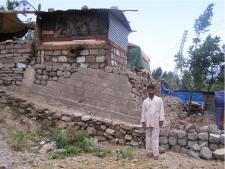 We mapped the surface trace of the fault rupture for about 5 km on the west bank of the Khunar River, through Balakot and into the Sarash Valley where it apparently ends. The surface expression of the rupture is remarkably consistent: a 10-20m wide zone of tilting to the southwest causing 2-3m of uplift of the northeast side. This tilt zone includes longitudinal (fault parallel) fractures, which may extend over the uplifted side of the fault much beyond the tilt zone. The position of the rupture, which can be sharply defined, is the critical factor controlling damage. The damage is dramatically higher along a strip on the up-thrown northeast (hangingwall) side of the fault, where the land is coseismically tilted, folded, and fractured. None of the buildings on this “strip of destruction” survived and very few avoided total collapse. In contrast, buildings on the footwall (down-thrown) side, as close as 10m or less from the fault, fared much better. Most of them avoided collapse and some showed only slight damage. This dramatic contrast between footwall and hangingwall damage does not seem to depend on foundation geology. In Balakot, for example, houses were built on the same fanglomerate on both sides of the fault, yet the difference in destruction was obvious from afar. Our observations are preliminary, of course, but the signal seems clear. Our conclusion is that geological criteria can be developed to characterize areas that are much safer from earthquake damage than others within Balakot, thus allowing for reconstruction of the town with sharply targeted restrictions. These observations also provide a model for recognizing active thrust faults in Pakistan, for targeting trenches across these faults that could expose prehistoric ruptures, and for predicting the distribution of potential damage associated with seismogenic rupture of these faults.