Winter Storm Extremes and Vulnerability Along the Atlantic Coast

Coastal flooding associated with powerful storms is a well-recognized natural hazard along the U.S. Atlantic coast. Given the significant regional intersection of high population density and critical infrastructure and the compounding impact of rising sea levels, it is important that we continue to improve our understanding and ability to quantify the region’s exposure to weather and climate hazards as well as the areas’ societal and ecosystem vulnerabilities, and how they interact to create the overall vulnerability to climate variability and change. We proposed a study of the region’s present vulnerabilities to cold season storms in order to understand the underlying societal and physical processes and quantify them in a systematic manner both in present and in the future under climate change and projected population growth.

For coastal areas, both humans and ecosystems are particularly vulnerable to storm surges. Therefore, we are characterizing the physical processes that determine the link between extratropical cyclones and storm surges, and determining the relative importance of different characteristics of the cyclones towards the generation of hazards. To accomplish this, we are running a numerical storm surge model, which will be forced by the stochastic storm model. In addition to our focus on surge dynamics, the numerical storm surge model will be adapted to study coastal erosion, a process that creates some of the worst hazards for humans living on the coast. To quantitatively assess risk and vulnerability of the coastal populations, we are carrying out systematic mapping of data from the US Census Grids, developed by NASA’s Socioeconomic Data and Applications Center (SEDAC). The drastic precipitation and temperature changes associated with winter extratropical cyclones also make them hazardous to coastal ecosystems. To assess these hazards, we are analyzing all clear MODIS-Aqua data that was collected by NASA before and after various selected extreme winter storms that impacted the U.S. East Coast over the last decade and demonstrate the value of remote sensing by assessing how the ecosystem (Chlorophyll and optical properties) respond to flood-induced erosion and sediment transport along the Northern U.S. East Coast in relation to these powerful storms.

Metrics of storm varialbility and strength and storm surge and erosion risk will utilize statistics of extreme value theory to determine return periods for different levels of events and link to our analysis of human and ecosystem vulnerability. Thus providing an improved understanding of the coupled human-natural systems along the coast in extreme winter storm situations and delivering probabilistic information in support of decisions for adaptation and response. 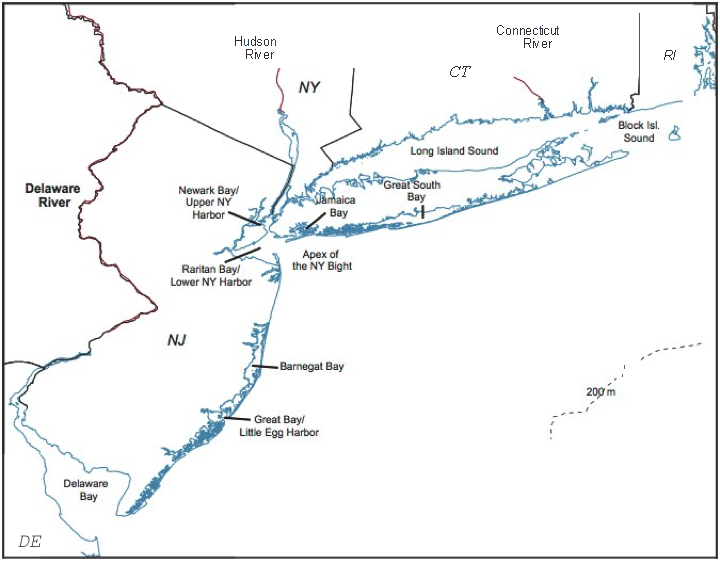 Focus Region for this study, The central Northeast Atlantic Coast of the United States 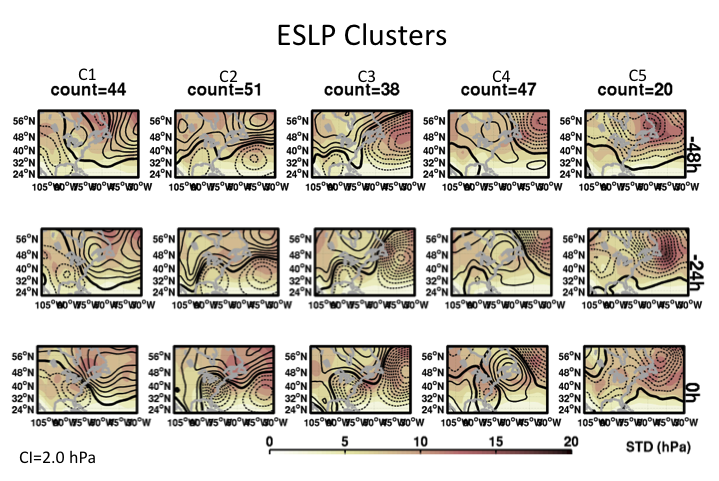 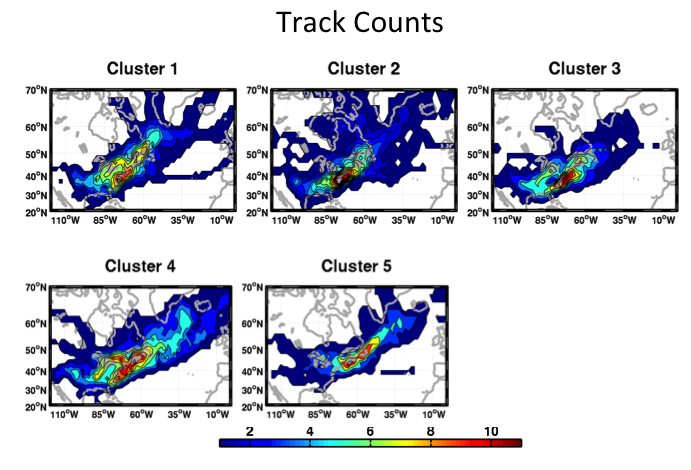 Figure 2: The counts of storm tracks passing nearby the Battery associated with each cluster shown in Figure 1. Counted within a unit circle of 2.5 degree radius. 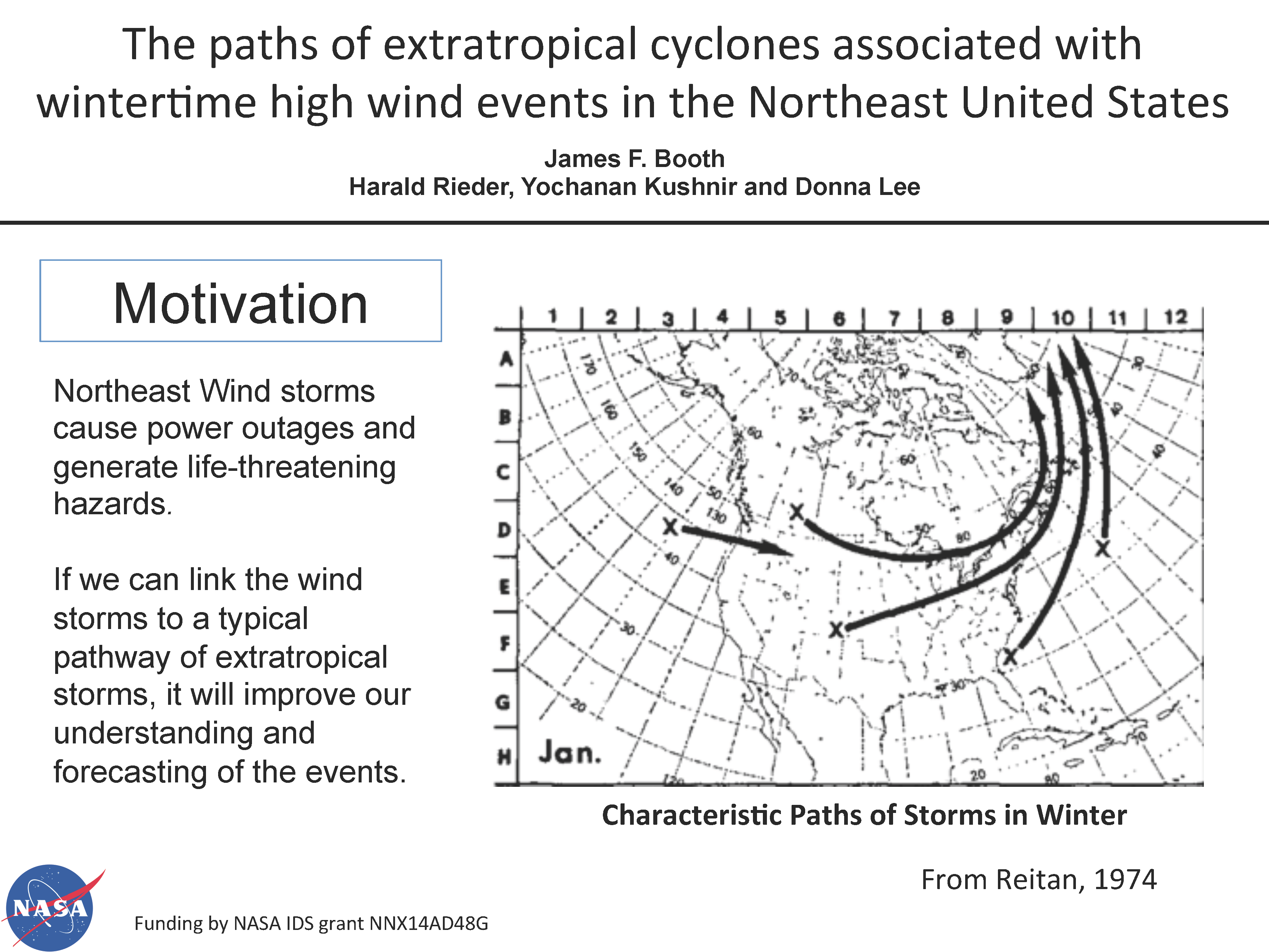 Considerably less work has been done on quantifying extratropical cyclone (ETC) hazard than tropical cyclone (TC) hazard. The development of a statistical-stochastic model for Nor’easters, one of the most damaging types of ETCs for the U.S. Northeast is a key part of our work. The model includes simulation of the genesis, track, intensity, lysis, and geometry of the storms. Use of a complete life-cycle statistical model (compared to statistical incidence models separately at each site of interest) will allow us to better understand sensitivities of hazards to large-scale climate indices, such as SST and NAO and arrive at a better probabilistic definition of the hazard.

Once a nor’easter model is developed, tested, and validated it will be used to generate a large (~107) set of synthetic storms. We will then perform frequency analysis on this large set to estimate (with uncertainty) annual occurrence probabilities on Northeast US locations in various combinations of hazard variables; e.g., intensity, size, and propagation speed. We will compute these probabilities as a function of the predictor climate-state variables. A generic sample storm from each of the most hazardous variable combinations will be used to drive the hydrodynamic model to assess storm flood risk. 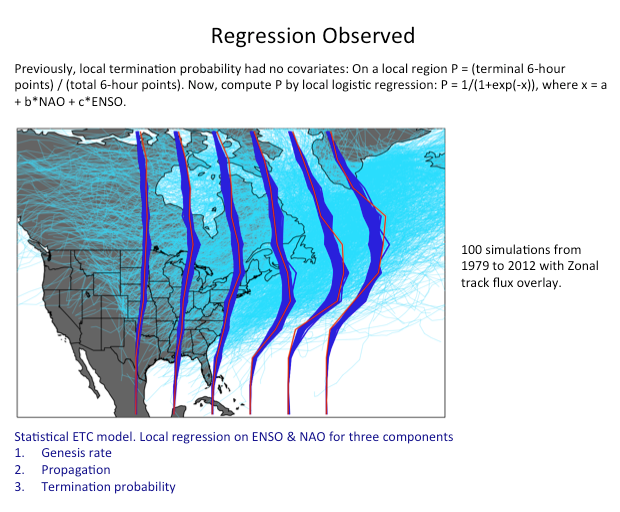 The goals of the coastal flooding and erosion component of this study are two-fold: (1) To evaluate how probabilities of ETC-driven flooding will evolve with a changing climate, and (2) given coastal sand berms of a particular design height (meant for say, a 100-year storm) to quantify the probability-per-year of them being destroyed. The innovations to be employed here include (1) utilizing the new ETC statistical-stochastic model storm climatology and storm set to quantify the coastal ETC flood hazard for the present climate and for future decades, and (2) to quantify the coastal erosion impact of these storm events.
Erosion due to coastal storms is the removal of sand from the dry beach resulting from the mechanisms to redistribute sand such as wave action and increased water levels. Three important parameters define the severity of the erosion caused by a storm: (1) the total water level (including both the astronomical tide and the storm surge) dictates how high up on the beach the water will rise, (2) the wave conditions characterize the amount of energy available to move sediment and whether it will accrete or erode, and (3) the duration of the storm determines the length of time the beach is exposed to the above conditions.
The “simulated historical” ETC climatology will include storms created using the new ETC statistical-stochastic model. The “observed historical” ETC climatology is based on several decades of historical ETC reanalysis data, whereas the future climatology will be based on the results of this study’s ETC projections with the effects of climate change. Coastal flooding results for both the simulated present-day and the historical periods will be compared to evaluate whether they present similar flood probabilities.
Validation data for historical events is available from tide gauges, high water marks, and offshore NOAA buoys, and is utilized to verify the accuracy of historical flood and wave simulations. Validation for the most severe storm tides is being conducted under separate funding, but validation for the modeled wave heights and periods will be conducted under the StormEVAAC project.

Modeled storm tide, wind and pressure for the 1992 December 11 Nor'easter in the New York City region. At the top right is a time series of the water elevation at New York City's Battery Park, showing the undulation of the tides over 6 days and how the storm surge gradually raised the tides higher to form the maximum storm tide of 2.3 m. In the other two panels are different scales of maps of the region, showing wind vectors (see scale of a threshold 33 m/s hurrican strength wind speed), isobar lines and color shading of water elevations.

Powerful winter storms have direct impacts on the coastal built environment but their impact on estuarine and coastal resources is less well understood. We examine the precipitation, surge and wind impacts on these aspects over the time of the MODIS mission with a multi-scale approach based on 1-km and 250 m resolution data. The direct impact of winter storms is reflected by increases in suspended sediment and small particles that may indicate near-shore bacterial populations.

The nature of winter precipitation also may be important in that rainfall distributed evenly throughout the winter appears to lead to different ecological outcomes than a large snow pack that supports an unusually large freshet. 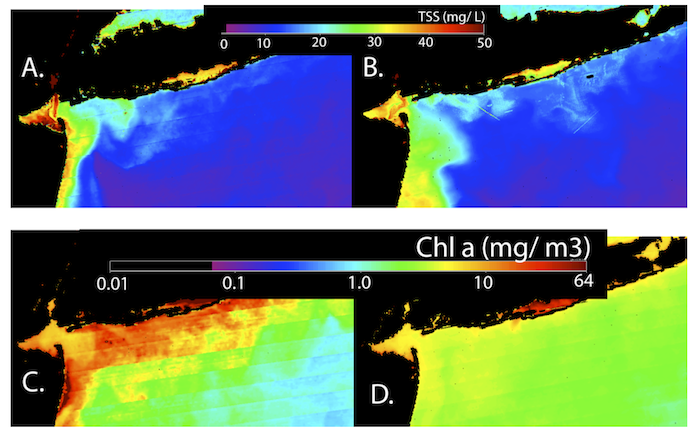 MODIS Aqua data processed by the Naval Research Laboratory’s (NRL) Automated Processing System (APS) software at pseudo 250 m resolution. A and B are the Total Suspended Solids (TSS) product 2 days before (A) and 2 days after (B) an extratropical cyclone on 3/14/10. C and D are the Chl a product 7 days before (C) and 11 days after (D) Hurricane Sandy on 10/29/12. Sandy was followed closely by a Nor’easter and the scenes reflect the impact of both storms. 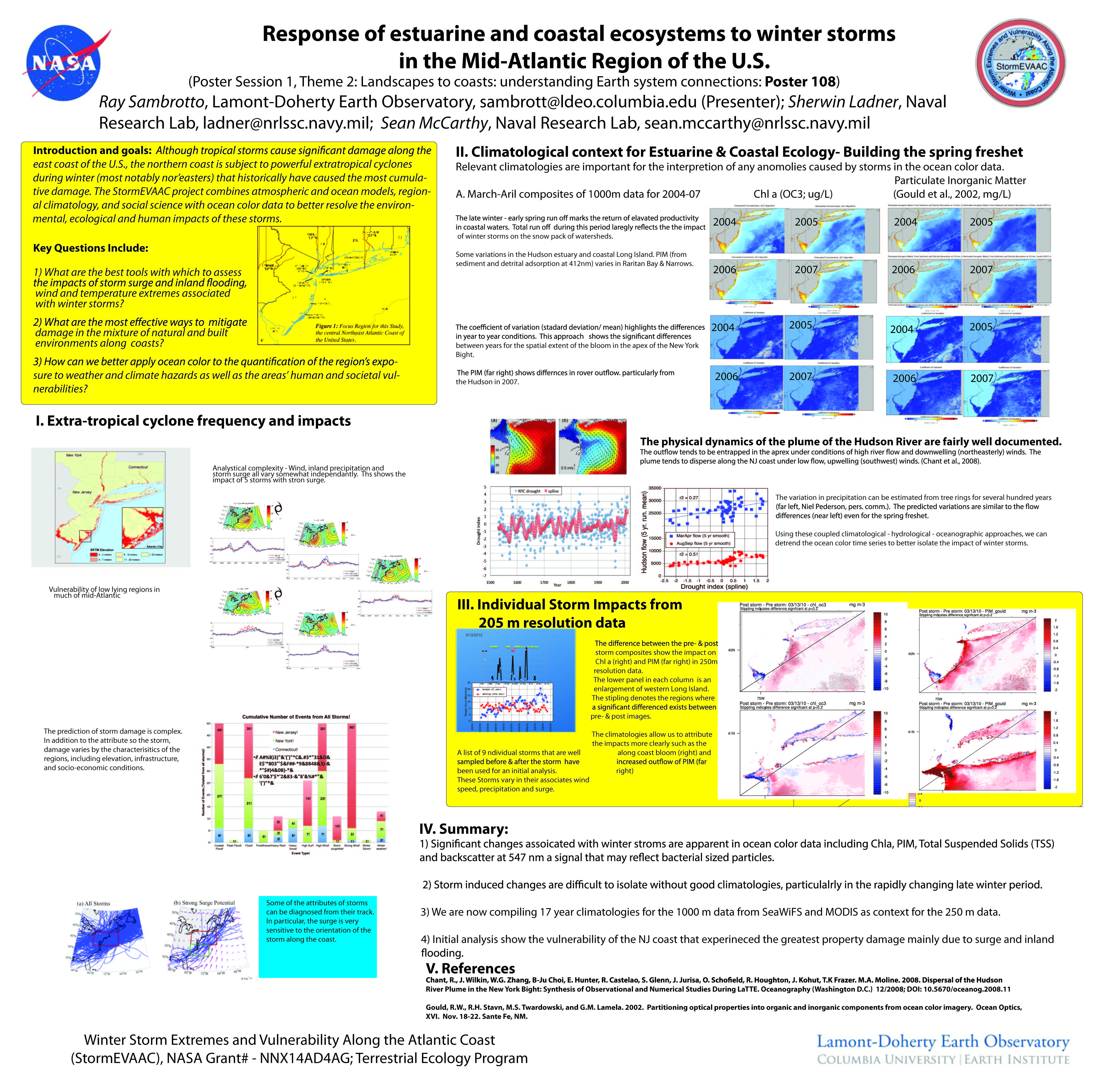 We are assessing and analyzing human vulnerability –i.e. the vulnerability of human populations, households, livelihoods and infrastructure—to winter storms in the NE United States in 1990, 2000 and 2010 using a mixed approach: place vulnerability and vulnerability mapping. We aim to address exposure to hazard, social vulnerability, and temporal and spatial variability and trends, to uncover the underlying structural conditions of human systems, and to estimate the impact and aftermath of specific events. 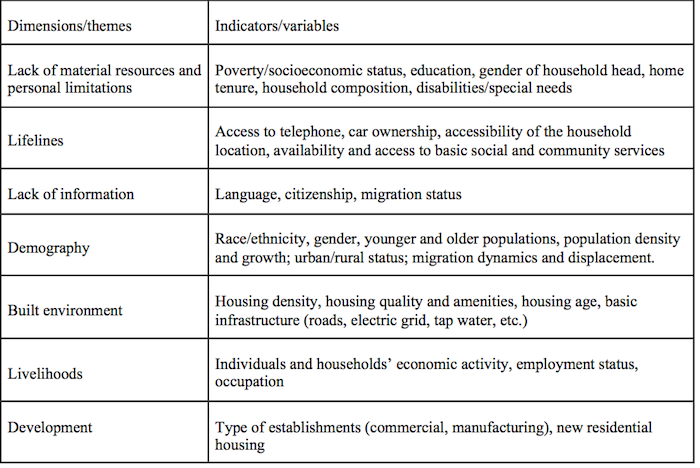 Source: Cutter et al. 2003; Cox et al. 2006; Esnard et al., 2011
The main source of data for the vulnerability assessment is the US Census Grids http://sedac.ciesin.columbia.edu/data/collection/usgrid, developed by NASA’s Socioeconomic Data and Applications Center (SEDAC). This collection provides raster data sets of population count, housing counts, and a variety of demographic and socioeconomic characteristics (age distribution, race, ethnicity, income, poverty, educational level, immigrant status, household size, one-person households, female-headed households with children under 18, linguistically isolated households, occupancy of household units, seasonal usage, occupied housing units without a vehicle, and year of construction). Additional data sources will be needed for some of the variables of interest in the building of the vulnerability indices and in the assessment of impact and recovery after storms.

COASTAL STORM EVENTS AND PROPERTY DAMAGES ASSOCIATED WITH WINTER STORMS IN THE TRI-STATE AREA
Winter storms pose a number of hazards to coastal communities in the U.S. Northeast including heavy rain, snow, strong wind, cold temperatures, as well as coastal and freshwater flooding. These hazards can cause millions of dollars of property damage from one storm alone. This study addresses the impacts of recent winter storms from 2001-2012 on 4 coastal counties in Connecticut, 15 in New Jersey, and 13 in New York and underscores the significant economic consequences extreme events may have on private and public property.
A set of sixty-one winter storms were chosen based on station averages of surface wind strength, heavy precipitation, high storm surge, and high storm tide, and were used to investigate which storm types defined by these categories lead to the most damage. The analysis on the types of hazards (or events) and associated property damage from the National Climatic Data Center Storm Events Database indicate that flood and strong wind were among those most frequently documented hazards for these winter storms, while floods were responsible for the highest damages. In addition, storms falling into two or more categories (“multiple category storms”) were responsible for a greater portion of the overall damage. The counties in New Jersey experienced the most storm events and property damage per unit area based on all storms, but we found no discernable connection between the number of storm events that afflict a county and the level of damage they face, or between population density and the damage amount. 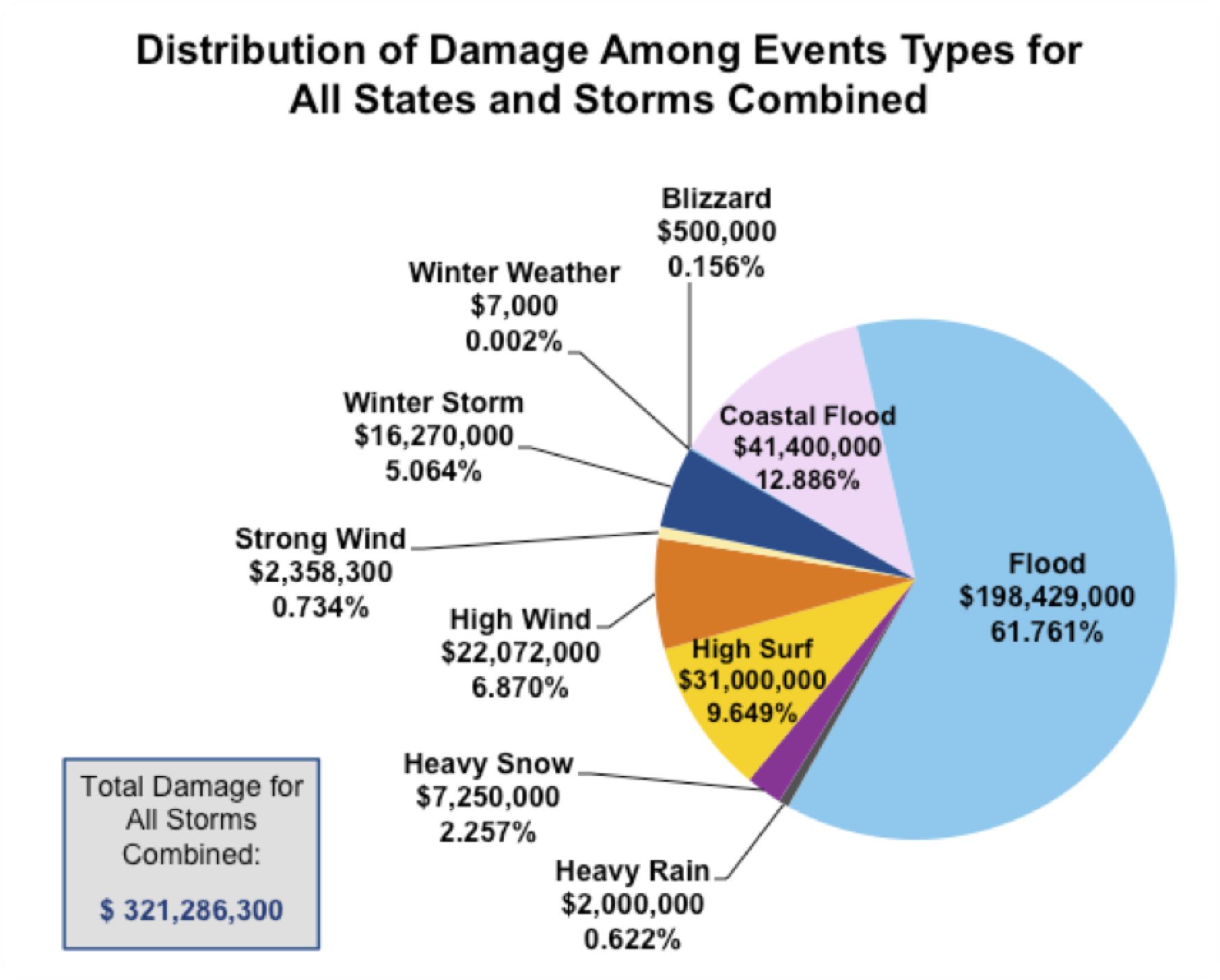 Figure 1: Damage per event type for all major winter storm losses for Connecticut, New Jersey and New York combined. The chart indicates the hazards, or “events,” contributing to the overall losses total. Each event type’s percent of the damage (all hazard losses combined) and property damage dollar amount are listed. Flood losses (freshwater and coastal) account for most of the damages overall 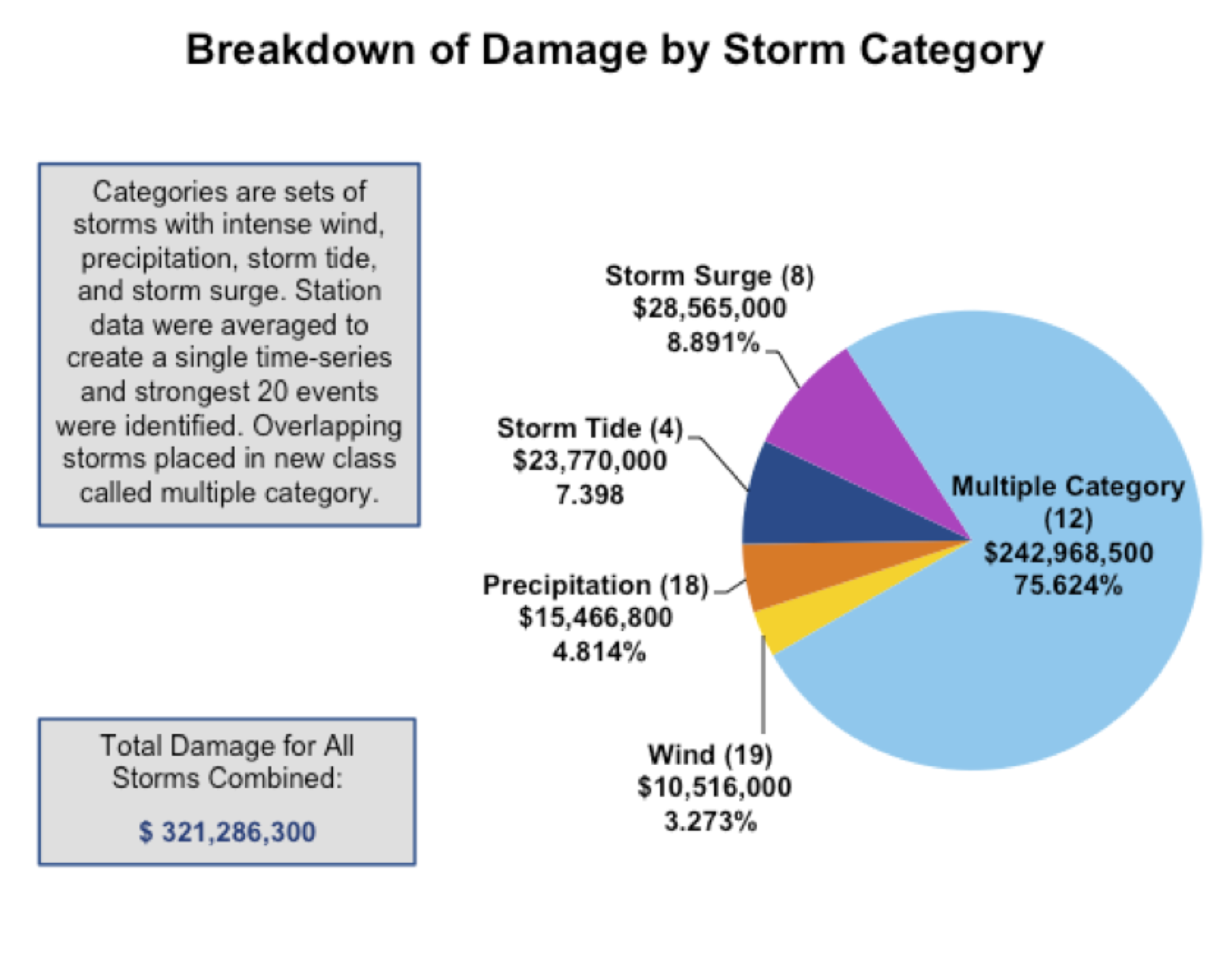 Figure 2: Distribution of damage among storm classes for all states combined. The damage amount per type and percentage of total damage for all storms combined are listed. The number in parentheses indicates the number of storms that fell in that category. Multiple Category storms caused the most damage by far. Storm surge and storm tide storms caused more damage than precipitation and wind and with fewer storms.