The region of interest is an area that extends from the Indian sub-continent into Southeast Asia, southward into Australasia, and northward into east and central Asia (figure1).  Statistical modeling of the tree-ring network with climate records and fields known to be associated with the climate of ‘Monsoon Asia’ will allow us to quantitatively reconstruct regional expressions of and large-scale contributors to Asian monsoon variability.

This project will thus focus on dendroclimatic reconstructions of key aspects of the Asian monsoon climate system.  By developing and integrating dendroclimatic records with larger-scale Asian monsoon processes, the reconstructions will provide valuable new insights into how the monsoon and its component processes have varied and interacted prior to the start of the instrumental observed system, which may be strongly perturbed by 20 th century greenhouse forcing.

The Tree-Ring Laboratory, Lamont-Doherty Earth Observatory, (TRL-LDEO) is uniquely positioned to execute the research goals of this proposed 5-year project.  We have conducted tree-ring research in various parts of Asia and Australia for more than 10 years, during which the lab has produced a number of tree-ring chronologies and climate reconstructions for Nepal (Cook et al., 2003), Mongolia (Jacoby et al., 1996; Pederson et al., 2001; D’Arrigo et al., 2000, 2001a), Thailand (Buckley et al., 1995; D’Arrigo et al., 1997a), Indonesia (Jacoby and D’Arrigo, 1990; D’Arrigo et al., 1994), and Japan (D’Arrigo et al., 1997b; Davi et al., 2001).  We have also expanded our dendroclimatic activities into China , Bhutan , and India, and have made exploratory trips to New Caledonia and northern Australia.  These activities have enabled us to develop a number of important scientific collaborations with scientists, institutes, and universities in several countries within the proposed research area. 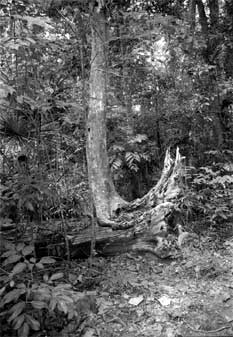 Young ficus growing on an old, downed teak on the Island of Muna off the southeast coast of Sulawesi, Indonesia