In 2004 and 2005 TRL scientists, in collaboration with scientists and students from Lanzhou University, sampled nine new sites and resampled a tenth site in central China. These nine sites are all but a fraction of those required for the purposes of reconstructing China's vast and complex climate system but are a start in expanding the extant network of collections in the possession of other labs both within and outside China. 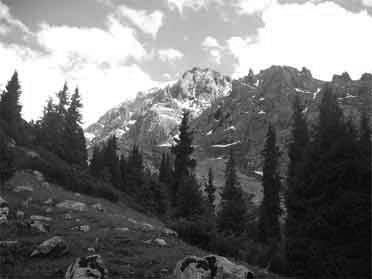 With the assistance of many collaborators, we are hoping to collect enough chronologies from across China to accurately reconstruct the synoptic temperature and precipitation patterns that have characterized China's climate for the past 300 - 1000 years. We estimate this job will take another three years to accomplish.

In May of 2005 a small team went to the eastern Tian Shan mountains in search of long chronologies from Picea tianshanika , Tian Shan spruce. Travelling first by train from Lanzhou, then by bus from Urumiqi to Xining, then onwards by 4wd and horse, seven new sites were collected (see map below).

Half of the sites sampled were in near tree-line elevations. Access was often by a four wheel drive pickup which on the last day died and had to be carried down from the mountains. Such serendipitous adventures were common and often lead to some very pleasant, and unexpected overnight stays in local villages or tents. In total, our loaner vehicle broke down four times before being permanently retired. 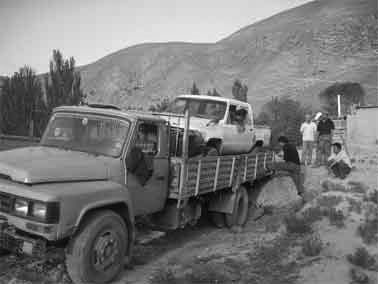 It is said that one really cannot appreciate how large China is until they have travelled to the far west. In many respects this is true. What is also true is one cannot fully appreciate China's cultural diversity without visiting the remote western provinces. In Western China there is a large influence of Russian and Middle Eastern cultures. Signs, and newspapers are written in both Mandarin and Arabic. Lamb and chicken are the most popular dishes, and leavened bread is found everywhere. 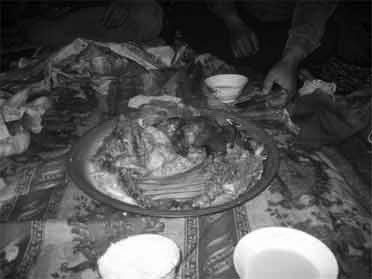 What is most apparent when travelling across western China is the decrease in population density. Unlike the east, capital cities in western China are much smaller ranging from 400,000 to 1 million people. As one leaves the larger cities the population density decreases rapidly. Most of the agriculturalists in this part of the country still retain the nomadic tradition of moving their entire household, especially their animals, to higher elevations for the summer months. This annual migration is synchronized with the onset of the dry season in lower elevations and will last for upwards of three months. In 2005 the migration started very early at the end of May and some were concerned that there might not be grazing material to last till September. 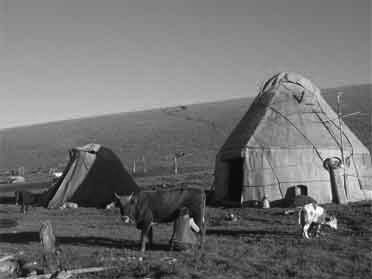 A summer camp for a family of farmers in the Tian Shan mountains.