Researchers from the Lamont Tree-Ring Lab have been conducting investigations in Indonesia since the early 1990's.  For example, we have e successfully updated the early record of Berlage from Cepu, a site in central Java (Jacoby and D'Arrigo 1990), and used to reconstruct the winter Southern Oscillation Index (SOI; Stahle et al,. 1998) Additional samples  have now been collected from many locations across the archipelago resulting in a small network of teak chronologies (see map below). 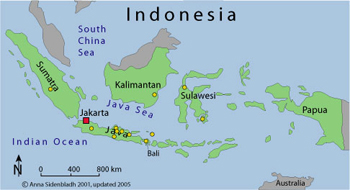 The most recent  expedition, in February to March of 2005, resulted in the recovery of subfossil teak samples that have strong potential for extending the living tree chronologies from Java even further back in time. 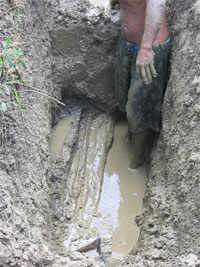 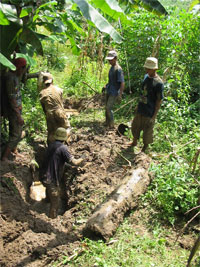 Droughts result in decreased tree growth of  teak and other vegetation over much of Indonesia. Droughts tend to occur during the warm ENSO phase, when the  Indonesian Low pressure cell migrates eastward. The figure below demonstrates the similar climatic response of four Indonesian chronologies with the Southern Oscillation Index (SOI). The teak ring-width chronology from Muna, southeastern Sulawesi (AD 1565-1995), is the first from this island and the oldest in our current tree-ring network for Indonesia.

Coring old-growth teak in a forest reserve near Semarang, Java

The network of tree-ring chronologies from Indonesian teak has been combined with coral d 18 O series to reconstruct sea surface temperatures (SSTs) for the Indonesian  (western Pacific) warm pool (see figures below; D'Arrigo et al. in press, Paleoceanography). October-November drought (PDSI) has also been reconstructed for the island of Java (D'Arrigo et al. 2006). SST and rainfall variations for Indonesia  are strongly correlated with ENSO  See publications section for additional information.

Indonesian  warm  pool SST reconstruction. A. Actual (red) and reconstructed (black) September-November Indonesianwarm pool SSTs. Volcanic episodes are indicated with arrows. B. Running 31-year correlation plots between the reconstruction and instrumental data. Correlations are calculated for both the unfiltered data (green) and 1 st differenced transforms (blue). C . and D .: As in A and B , but for Wilson et al. (in press) tropical SST reconstruction. See D'Arrigo et al. (inpress, Paleoceanography) for details.

Spatial correlation fields (1885-1989) of actual (A and C) and estimated (B and D) Sept-Oct Indonesian warm pool and global SSTs from Kaplan et al. (1998).  A and B generated using unfiltered data, while C and D were calculated from 1 st difference transformed time-series. (D'Arrigo et al. in press, Paleoceanography).

During TRL expeditions in 2005 and 2006, subfossil teak samples were recovered.  These samples were obtained from crews of excavators who dig up the buried wood and use it for commercial purposes.

The figure below shows tree-ring indices for three remnant teak stands in central Java, as well as the indices for one floating teak chronology.  The floating chronology is centered on A.D. 1650, which was the calendar date obtained from a radiocarbon analysis of one of the subfossil samples.  When this calendar date is assigned to the subfossil chronology, it results in less than 20 years of overlap with the longest living chronology, not enough for successful crossdating.  More samples from living trees and subfossil logs are likely needed to bridge this gap in the record.