The Monsoon over the Himalayas

Precipitation over the Hindustan Plain and along the southern flank of the Himalayas is strongly influenced by the “monsoon trough”, where monsoon lows and depressions travel westward across the Himalayas.  The precipitation observed over Nepal is considered party due to these disturbances (Kraus, 1966; Nakajima et al., 1974).  However, it has been found that the Southwest Monsoon circulation over India, through to the Tibetan Plateau, is closely related to the quasi-steady thermal anticyclone over Tibet called the “Tibetan High” (Hastenrath, 1985; Yasunari, 1976).  This high pressure cell is generated by the sensible heat supply released from active cumulus convection over the Tibetan Plateau and the Himalayas (Hastenrath, 1985; Yasunari, 1976). 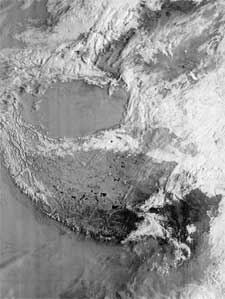 During the course of the Southwest Monsoon there are periods when the monsoon trough moves northward over Nepal, and precipitation over much of India decreases.  This is called a “Break in Monsoon” (Das, 1986; Ramanadham et al., 1973; Rao, 1976).  This interruption of the Southwest Monsoon has been related to a circulation cell in a meridional-vertical plane involving both the Indian lowlands and the Tibetan Plateau (Hastenrath, 1985; Pant, 1983).  Therefore, monsoonal precipitation over the Nepalese Himalayas may be related directly to the movement or variability of the Tibetan High and the influence of the monsoon trough (Das, 1986; Hastenrath, 1985; Nakajima et al., 1974; Yasunari, 1976). 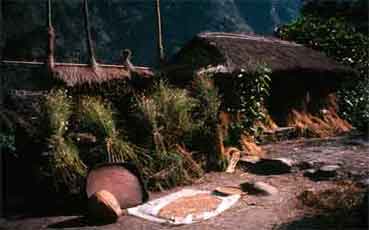 The monsoon first reaches the Himalayan range over Bhutan, Sikkim, and eastern Nepal, where it arrives the earliest and stays the longest (Fig.1).  The eastern Himalayas consequently receive the highest total precipitation during the year, in excess of 2638 mm/yr in contrast to the far west in northern Pakistan which annually receives only 940 mm/yr (Stainton, 1972).  Information does not yet exist for any reliably detailed picture of synoptic spatial and temporal patterns of monsoon precipitation over the Himalayas, however.  Even so, there are a handful of point-studies that have produced very detailed reports with respect to local climates in Nepal (Ageta, 1976; Inoue, 1976; Shrestha et al., 1974; Yasunari, 1976).  Yet, given the high degree of variability in local climatology, and the geographic concentration of those extant climate studies to central Nepal, their applicability in characterizing Himalayan climate as a whole must be seriously questioned (Nakajima et al., 1974; Schmidt-Vogt, 1990; Yasunari, 1976). 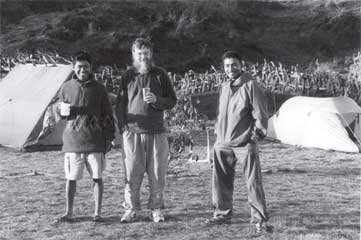 ‹ The Broken Kathmandu Record up The Nepal Tree-Ring Network ›