32 tree-ring chronologies were used directly in a Principle Component Regression analysis (PCR) to reconstruct Nepal temperatures.  The PCR procedure used here closely follows that outlined in Cook et al . (1999).  In this case, the calibration and verification periods were 1932-1991 and 1898-1931, respectively, and years t and t+1 of each chronology were considered as candidate predictors.  Based upon the temperature correlations shown in Fig. 5, we tried a number of seasonal temperature combinations and report here on the two most successful ones:  February-June and October-February.  Other temperature seasons, including those related to the monsoon itself, could not be successfully calibrated and verified. 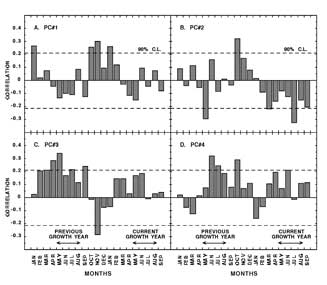 Figure 5.  The simple correlations of the PCs with Kathmandu monthly temperatures organized into a 21-month dendroclimatic year that includes the current and previous growth years.

The Nepal temperature reconstructions, after adjustment for lost low-frequency variance, are shown in Fig. 6.  Each shows a conspicuous cooling shortly after the eruption of Tambora in 1815-16, as noted earlier in the PCs.  The temperature depression from the long-term mean is on the order of 1.5°C for February-June and 0.8°C for October-February.  Intervals of below-average temperature, which are broadly contemporaneous with the Little Ice Age, are also indicated in both reconstructions, although there appears to be some clear seasonal differences.  Cool temperatures are mainly restricted to 1670-1770 in the February-June temperature reconstruction.  In contrast, the October-February record indicates generally below-average temperatures from 1605 to 1770 and a long-term warming trend up to 1880 (see Cook et.al. 2003). 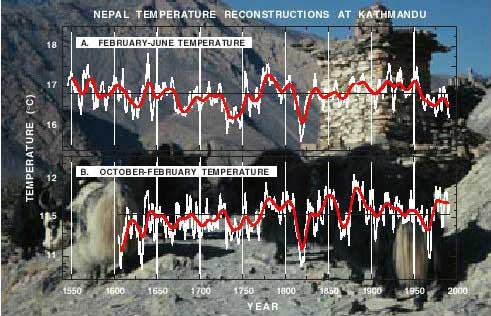 Figure 6. The final Nepal temperature reconstructions. These series have been adjusted for lost multi-centennial variance following the method described in the paper.  The red curves are the 20-year low-pass filtered values.