Eastern red cedar is the principal species used in this project.  This species is often fraught with severe false ring banding (i.e., intra-annual latewood bands) that can be very difficult, if not impossible, to identify.  Thus, in many instances multiple samples from a given site were rejected outright as being updateable.  This was the case with both cores from living trees and many cross-sections from remnant wood.  This became increasingly the case toward the northern limit of the species range at our sites in Pennsylvania, New York, and New Hampshire (Fig. 1).  Nevertheless, reliable records from most of these locations were developed after much effort.  In addition to our own sizeable collections, many hours were spent re-analyzing the cores and sections in the Francis Hawley collection from eastern Tennessee (Hawley, 1937) that was sampled in the 1930s (samples, courtesy of Dr. Henri Grissino-Mayer at the University of Tennessee).  We obtained the entire original Francis Hawley collection and collected new specimens toward the goal of extending the Hawley chronology to the present.  Although some samples in the Hawley collection do not cross-date by the contemporary standards of COFECHA (Holmes, 1983), we have successfully cross-dated a number of them and have updated one site with samples of living red cedars growing in the near vicinity of an original Hawley collection (site NBJ; see Fig. 1).

Activities in the Great Lakes region have focused on northern white cedar.  Several of the tree-ring chronologies developed there are several hundreds of years long with some over 1000 years in length (Kelly et al., 1994; Buckley et al., 2004).  Much of this progress has come about through our collaboration with Dr. Doug Larson, head of the Cliff Ecology group at Guelph University in Ontario, Canada.  Figure 2 shows the locations of most of our white cedar sites.

Figure 2.  Map of the Great Lakes Basin showing the location of the Niagara Escarpment and the three general sampling areas.  A = Bruce Peninsula, Ontario, B = Manitoulin Island, Ontario, and C = Door Peninsula, Wisconsin.

Eastern white cedar can also be a problematic species for dendrochronology, though owing more to “absent” rings located at varying locations around the stem rather than an abundance of “false” rings, as is the case for red cedar.  The development of chronologies from the Niagara Escarpment of Ontario and Wisconsin faced many of the same constraints as our red cedar network, owing to a high rejection rate of samples.  Often, even though the trees were cross-dated correctly, the estimations of mean value functions for some periods of time were below the accepted thresholds for reconstruction (Wigley et al., 1984).  Nevertheless, reliable chronologies, that showed meaningful sensitivity to climate, have been produced by the Ontario white cedar network (Buckley et al., 2004).

As mentioned above, the East Net red cedar network includes an updated chronology fist developed by Fransis Hawley. With the help of Dr. Henri Grissino-Mayer, who salvaged the collection and Hawley's notes on her collections years ago, we were able to resample some of the same sites. Francis Hawley's cedar samples, collected prior to the construction of TVA dams in the region, represents a treasure to both tree-ring science and the history of dendrochronology. Hawley's work in 1937and 1941, after C.J Lyon's, 1936, is arguably the first dedicated tree-ring research conducted east of Colorado. Today, most of her red cedar sites are under water, and that fact eluded us until we started searching for them.

With Hawley's original notes and maps we were able to locate the general area in eastern Tennessee where she sampled. After a few hot and sweaty days searching, there was a worry that either the trees had since been cut or the locations misplaced.

Norris Lake shoreline with red cedars growing on the edge.

When it finally occurred to us that first, since the time of Hawley's research the TVA had built many dams along the river drainages she was studying and second, that old growth red cedar is almost exclusively found on cliffs or escarpments, it made sense to begin searching reservoir shores for the tops of, one time, cliff faces. 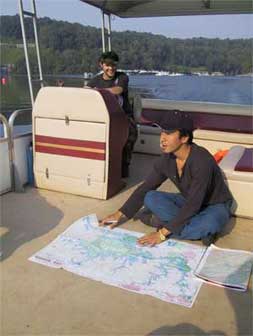 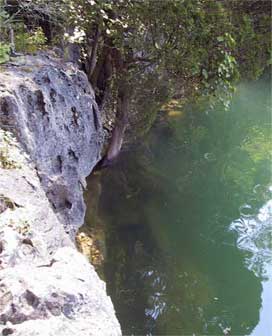 Travelling by boat made searching lake shorelines easy (left). Remnant old growth cedars, being inundated by the current lake level. Just visible below the surface are the tops of submerged stems still anchored to the cliff under water (right).

From a boat on the water, finding what remains of Francis' sites was no longer difficult. In a number of instances, where the cliffs were high and the water clear, one could see the tops of large cedars, 3 meters below the present lake level, still attached to the cliff face below the surface. Along the remaining, exposed cliff margin there were still some young living and standing dead cedars that were used to update Francis's original chronology.

Standing dead, shoreline stems (left) and some of the samples collected from them (right).