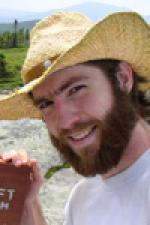 Plate tectonics is a beautiful unifying theory of geology, and one that answers many questions about the processes that create the earth's surficial variablity, from mountains and volcanoes to rift valleys, shallow seaways and mid-ocean ridges.  However, the theory of plate tectonics poses nearly as many questions as it has answered (in the way of most scientific breakthroughs).  The general question that interests me particularly is regarding the details of how the lithosphere (the brittle outer crust of the earth) deforms during plate collisions.  Deformation styles and mechanisms are controlled by crustal thickness and strength of the rocks, pre-existing structures from earlier episodes of deformation, as well as the stress-field induced by surrounding plate motions.

One way to understand the concept of 'differing styles of deformation' is to look at a mountain belt's large-scale characteristics.  Google Earth is a great way to do this; you can compare, for example, the long, linear, and parallel ridges and valleys of the fold and thrust belt of eastern Pennsylvania and northern NJ, with any of the Laramide uplifts in Wyoming (Bighorn, Wind River, Beartooth-Absaroka) and see how similar compressional stress fields, resulting from plate collisions, can result in dramatically different styles of mountain building (orogens).  Mountain belts can grow taller and wider, and they also eventually die out in a process called orogenic collapse.  This process, like orogenic growth, is influenced by the pre-existing structures in the lithosphere.   Our research group is very interested in the role that low-angle faults (detachment faults) play in crustal extension and orogenic collapse.  In coastal western Norway, a series of Devonian basins (ca 380 Ma) have been interpreted as supradetachment basins, in which sediments from a collapsing orogen are deposited directly onto the hanging wall of a low angle detachment fault.

I am spending the academic year 2012-2013 as a guest researcher at the University o Bergen, Norway, working on my thesis project in collaboration with several researchers here.  My research focuses on the Hornelen Basin, a rugged area of coastal mountains and glaciers several hours north of Bergen.

Several independent lines of evidence have led to the interpretation that the mid-Devonian Hornelen basin is a tectonically controlled supradetachment basin.  Stratigraphic evidence: 1) 25 km of shingled strata, dipping 30-40° to the east; 2) basin-wide coarsening upward megacycles that are recorded in multiple depositional systems within the basin; 3) present-day fault geometries that suggest a scoop-shaped breakaway on the eastern margin of the basin.  Combining this basin-architecture with the close spatial and temporal relations to the NSD mylonite zone and underlying UHP rocks has led to interpretation of these Devonian basins as a series of scoop-shaped supradetachment basins, with the brittle detachment faults splaying up from the mid-crustal mylonites.

The goal of my project is to test the supradetachment model using the abundance of  geochronological data available from the WGR.  The supradetachment model implies a direct link between movement on the brittle detachment fault (and thus basin filling) and exhumation of the WGR metamorphic rocks.  Initial results have focused on the detrital zircons of the axial alluvial sediments in the Hornelen, looking for metamorphic zircons that grew in the garnet stability field (eclogite facies).  U/Pb dating followed by trace element analysis using LA-ICPMS allows us to find a population of zircons with the right age of crystallization and then to look for the characteristic depleted HREE signature for eclogite facies growth.  So far, I have analyzed seven samples and combined these data with results from two unpublished theses, giving an overview of axial zircon populations from bottom to top of the stratigraphy.