Mission
Lamont-Doherty Earth Observatory seeks fundamental knowledge about the origin, evolution and future of the natural world. Its scientists study the planet from its deepest interior to the outer reaches of its atmosphere, on every continent and in every ocean, providing a rational basis for the difficult choices facing humanity.
Who We Are
Lamont-Doherty is one of the largest and most distinguished Earth science research institutions in the world. Our vibrant research and educational community is made up of more than 600 scientists, postdoctoral fellows, graduate students and administrative staff. Our scientists are known throughout the international scientific community for their innovation, collegiality and entrepreneurial spirit.
The Observatory is a core component of Columbia University’s Earth Institute, which brings together people and tools to address some of the world’s most challenging problems, from climate change and environmental degradation to poverty, disease and the sustainable use of resources.
Our Vision
Lamont-Doherty has been a leader in the study of our planet since its founding 65 years ago. Today, Observatory scientists continue the institution’s long tradition of addressing important questions in the Earth and planetary sciences.
Our focus for the coming decade is on deepening our impact, exploring new research areas of global relevance and continuing our culture of excellence.
Our Strategic Plan outlines an approach that will guide the Observatory over the next ten years in its two-fold quest to remain at the forefront of research in basic Earth, ocean and atmospheric sciences, and to become a leading intellectual center in the integration of Earth, human and environmental sciences to support and promote sustainability in a rapidly changing world. 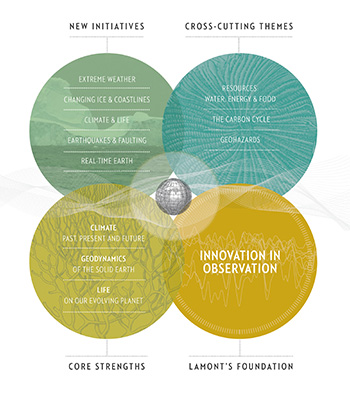 Our Research Initiatives
The Earth system is dynamic, involving interactions within and among the solid Earth, ocean, cryosphere and atmosphere, including processes that influence and are influenced by life. Humans are now altering the basic functioning of Earth systems to such a degree that we must address the problem of sustaining a habitable planet.
In the next decade, Lamont-Doherty will continue to pursue fundamental scientific research on the most pressing and relevant questions concerning Earth processes.Our scientists are committed to supporting the three major core strengths that provide the foundation upon which all of the Observatory’s interdisciplinary work rests. These areas are Climate Science, Geodynamics of the Solid Earth and Life on our Evolving Planet.
In addition, three cross-cutting themes resonate through the institution and span the traditional disciplinary boundaries of climate, oceanography, solid Earth and biology. These themes are the Carbon Cycle, Geohazards, and Resources: Water, Energy and Food.
We’ve recently identified five new initiatives that are the focus of Lamont’s research in the coming decade. Each of these interdisciplinary initiatives anticipates important near-term advances in basic science and addresses one or more issues of major societal importance, and represents new directions for the Observatory. These are:
(1) The recently established program for Climate and Life.
(2) A newly formed program for the study of Extreme Weather and Climate, with a focus on the effects of long-term change.
(3) An initiative on Changing Ice, Changing Coastlines that focuses on ice sheet dynamics and sea level response on a warming planet.
(4) An initiative for the study of Earthquakes and Faulting.
(5) An initiative for understanding the dynamic Earth in Real Time.
Through an emphasis on these research themes, the Observatory will be poised to understand and manage the critical environmental issues facing our planet, while remaining a world leader in Earth science research and education.
Learn More
Each year, our understanding of Earth improves, yet new discoveries await us. It is that next insight on the horizon that keeps our scientists excited to learn more about how and why our planet changes as it does.
Explore our Strategic Plan to learn more about our vision for the future.