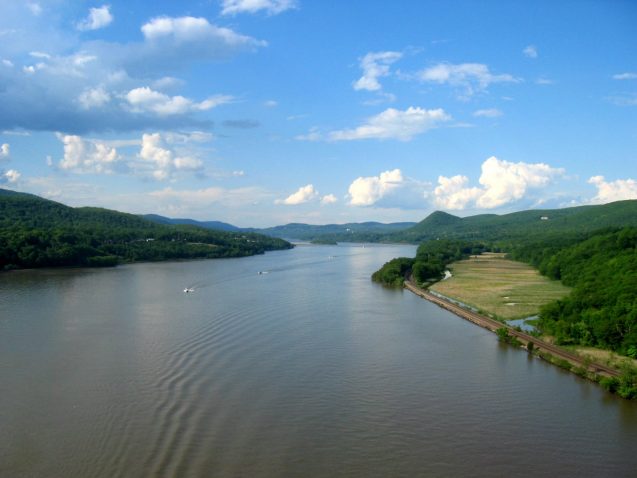 The Hudson River is not an ordinary river. Rather, it is an estuary, where salt water from the ocean mixes with freshwater for 153 miles, from New York Harbor to Troy, NY. During the 1950s, the Hudson was an open sewer, with industries discharging toxic chemicals, paints, heavy metals and other waste into the water. Fish were contaminated with PCBs (polychlorinated biphenyls) dumped from General Electric’s factories into the upper Hudson, and more than a century of dredging and filling devastated its ecosystems. 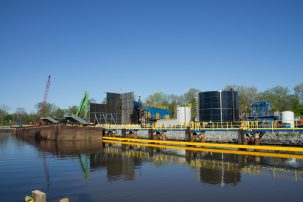 Today the river is clean enough for fishing, boating and even swimming, mainly due to the work of environmentalists and clean water laws enacted in 1960s and 1970s. But there is still work to be done to improve the estuary’s water quality. During heavy rains, combined sewage and stormwater systems dump sewage and other contaminants into the river at 150 spots in eight communities. After six years of dredging by General Electric, some PCBs and other contaminants still remain in the river’s sediments. And increasing development along the waterfront is destroying habitats. Moreover, the impacts of climate change—rising sea levels, storm surge, flooding and drought—are posing new risks to the infrastructure, ecosystems and human communities of the Hudson.

To address these challenges, researchers from Columbia University’s Earth Institute joined forces with Partners Restoring the Hudson to create the Hudson River Comprehensive Restoration Plan. Released in August, the plan reviews the current state of the estuary, identifies potential sites for restoration, recommends projects to enhance the river, and looks at issues that need to be addressed to prepare the Hudson to meet the effects of climate change. The report will help guide the efforts of the existing actions agendas of the New York State Hudson River Estuary Program and the federal New York-New Jersey Harbor & Estuary Program.

For the report, Columbia University’s Center for International Earth Science Information Network (CIESIN) assessed the estuary’s current conditions. In the first phase, CIESIN collected over 200 sets of data on the habitats and infrastructure of the Hudson.

Linda Pistolesi, a geographic information specialist in the Geospatial Applications Division at CIESIN, coordinated the data assessment and collection, identifying as many existing data sets as would be useful to create a physical habitat model. The model is a map of the distribution of physical habitat types across the entire estuary, from one meter above to 20 meters below sea level, that includes information about sediments and slopes.

“I don’t think there was ever a pre-existing habitat model quite like this,” said Pistolesi. “This was the first really comprehensive model. And it was intended to serve as the foundation for our next step, which was to produce the ecological assessment.”

For this next phase, the team identified data sets representing impacts and threats across the entire estuary area, such as boat launches, dams, hard structures on the shoreline, stormwater discharge points, and more. Based on the location of the threats, the team then used the physical habitat model to determine which habitats had been affected and by how many impacts.

Andrew Juhl, an aquatic ecologist and oceanographer at Columbia’s Lamont-Doherty Earth Observatory and in the Earth and Environmental Sciences Department, was asked to lead a team in analyzing past and current stormwater and wastewater impacts on the Hudson, and to make recommendations to minimize those impacts. 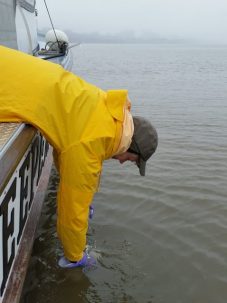 “The primary source of poor microbial water quality in the Hudson is sewage contamination,” said Juhl, who has been testing water quality with Riverkeeper, an organization whose mission is to protect the Hudson. “We’ve been documenting that for about 10 years and have become the most comprehensive source of information, which is available to the public, about microbial water quality conditions in the Hudson between Albany and NYC.” The group tests water quality at 75 designated locations every month, for six months of the year, to determine whether conditions are improving over the long term. Juhl said, “What we’re trying to understand is, we have this quasi-natural system, which is the river. Then on a regular basis, we dump an enormous quantity of sewage into it, which contains all sorts of bacteria that don’t belong there. Then what happens? Where do they go? What is their fate?”

The Storm and Wastewater team incorporated this water quality information into its review of historical and current conditions. They noted that the estuary’s water quality has dramatically improved since the century before the 1970s, when untreated wastewater spewed into the river, but explained that problems persist. For example, levels of fecal bacteria (from sewage) still sometimes spike after it rains, especially around Albany or in tributaries, due to stormwater discharges and combined sewage overflows.

The team laid out six objectives and accompanying actions to reach its goal of achieving and maintaining consistently high water quality throughout the Hudson River estuary by 2040. From there, the challenge will be to replace or harden storm and wastewater infrastructure to deal with rising sea levels.

Margie Turrin, education coordinator at Lamont-Doherty Earth Observatory, headed a group focused on estuary education for the report. “If you don’t understand it, you can’t help to protect it,” she explained.

The Education group identified existing Hudson River educational opportunities available through schools, nature centers, environmental organizations and others. The team then established objectives for: every K-12 student in the Hudson River watershed to receive educational experiences about the river and its tributaries; high school, college and graduate level students and citizen scientists to have the opportunity to do research on the river; every waterfront community to have public access to the river; the plan’s materials to be made available to all residents for educational purposes; and the development of technical and other information for professionals and decision makers. 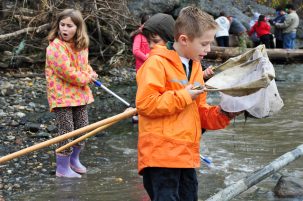 “I think the most important piece is that everybody has an opportunity to develop a relationship with the river,” said Turrin. “We would like to see every student that’s within the watershed have an opportunity to experience the Hudson River on a personal level through education.”

Turrin also completed a comprehensive document including the scientific data underlying the original report. This can be used to identify future needs and targets for the river—for example, for a community that wants to take action to improve its waterfront. “All of that back story is there and that data is there and has been compiled into a place where it can be drawn upon,” she said.

Proposed Plans for the River

Juhl called the report a major milestone, and commended it for setting comprehensive and clear goals for the Hudson River system. “It helps to focus attention … on what the really important things are that need to be done,” he said. “We certainly hope this is going to be used by the research and management communities, and legislators in terms of allocating funding. It’s now up to the public, and the research and management community to stick to these goals.”

Commitment to the goals of the Hudson River Comprehensive Restoration Plan may be tested soon. The Army Corps of Engineers, one of the Partners Restoring the Hudson, was tasked with studying what could be done to deal with storm surge and sea level rise. It has proposed six different plans. One plan calls for “no action.” Another relies on shoreline-based floodwalls and levees, including beaches, dunes and waterfront parks, which would protect communities from both storm surge and flooding, while allowing the rivers to flow naturally. But the other four proposals involve some kind of hard construction of in-water barriers across the harbor entrances that would block the natural flow of the water in and out of the estuary.

Pistolesi is concerned that the hard construction plans could “potentially do damage to the estuary ecosystem and maybe even have some unintended consequences, like flooding upstream if the barrier gates are closed to defend against storm surge —water trying to flow downstream would also be stopped by the barriers.”

The Army Corps says it will narrow the options down to one or two this fall. In the meantime, there is an ongoing public comment period until September 20.