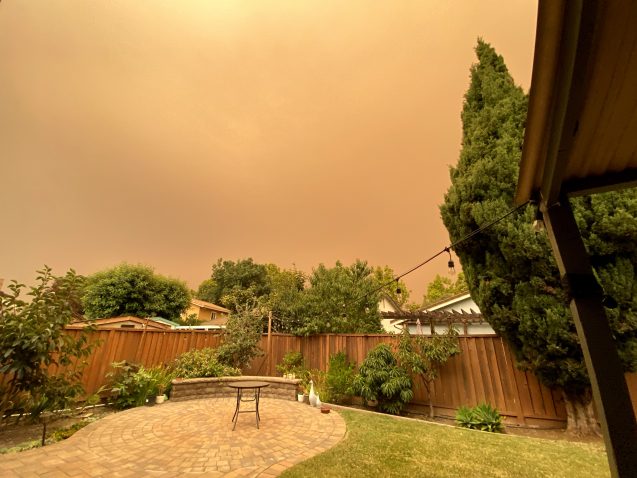 Wildfire smoke turns most of the Bay Area’s skies orange in this photo taken on September 7, 2020. Photos courtesy of Garima Raheja

After spending most of her childhood in New Delhi, India — one of the most polluted cities in the world — air pollution had become a fact of life for Garima Raheja.

In 2007, she moved to the San Francisco Bay Area with her family when she was in the fourth grade. “It was a very interesting transition for sure,” said Raheja, now a PhD candidate at the Lamont-Doherty Earth Observatory at Columbia University. 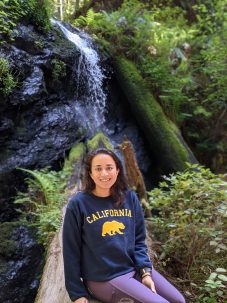 Garima Raheja is a PhD candidate at the Lamont-Doherty Earth Observatory at Columbia University.

Ten years after moving to California, she experienced the stifling impacts of air pollution again while heading to Alcatraz Island in October 2017. A major wildfire had broken out in Northern California and the sky turned pink and hazy from the high levels of air pollution. “My eyes started watering. This was the first time I experienced something like that in the U.S.,” said Raheja. “Now, wildfire warnings are sent out frequently here.”

That day acutely reminded her of how normalized it has become to live with hazardously high levels of air pollution in urban India. “I’m deeply worried about my family back home in India as they experience the worst effects of air pollution. Especially my grandparents,” said Raheja.

By the time she went to college in California, she knew she wanted to study the atmospheric and public health impacts of urban air pollution.

“A lot of emphasis is put on individual efforts to reduce carbon emissions. But in New Delhi and many other urban areas across the world, the reason behind high levels of air pollution is often bad policy,” said Raheja. “If we want to make good policies, we have to interpret the impact of air pollution,” she added.

Although Raheja knew she wanted to study the impacts of air pollution, it took some time to find exactly the right path.

While she was pursuing dual degrees in data science and civil and environmental engineering at UC Berkeley, she joined the university’s Environmental Air Quality and CO2 Network. The research group’s aim is to install low-cost air sensors all over the Bay Area. That way, scientists can collect data and study the levels of air pollution caused by greenhouse gas emissions.

“We need more of these sensor networks around the world to make any kind of progress in improving air quality,” said Raheja.

Prior to that, Raheja completed an internship at NASA where she worked with a team that used satellite data to investigate the sources of methane emissions in different parts of the country. The data helped to identify methane hotspots where major leaks were taking place. 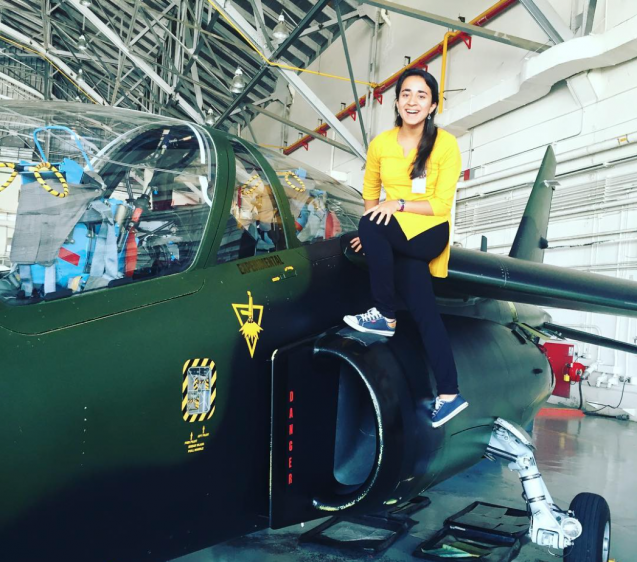 Raheja with the NASA Alpha Jet, which is equipped with instruments to measure air quality and greenhouse gases, during her summer internship at NASA Ames Research Center.

Even though Raheja enjoyed studying environmental engineering, during the latter half of her undergraduate program, she realized a lot of the techniques used in that field might not be effective in urban areas in countries recovering from colonization that have limited resources for monitoring air quality.

She finally found her calling in a statistics class. The professor discussed how computational tools can be effective in studying air pollution. That’s when she decided to carve her niche in data science instead.

“In the last 10 to 15 years, we have seen incredible advances in data science. When I realized I could apply my data science skills towards solving a problem that is personal to me, I became even more interested in delving into the vast amounts of data that air sensors can collect,” said Raheja. In particular, she saw a lot of potential in PurpleAir sensors — low-cost air quality sensors that provide real-time measurements on a public map.

While her interest in environmental justice intensified, she found an atmospheric science community at Columbia University that has been carrying out research in Africa and South Asia, in addition to the U.S. “At Lamont-Doherty Earth Observatory, atmospheric scientists are not just studying the chemistry of air pollutants. They are also using their findings for framing policies to fix problems,” added Raheja. “And that’s why I joined this team.”

As a PhD candidate, Raheja mainly focuses on using data from air sensors to measure fine particulate matter — tiny particles in the air that measure 2.5 micrometers (PM 2.5) and 10 micrometers (PM 10) or smaller. These include particles such as dust, soot, and smoke, and chemicals like sulfuric acid, ammonium sulfate and ammonium nitrate.

Once these substances are inhaled, they get lodged deep inside the lungs and can even enter the bloodstream.

Both PM 2.5 and PM 10 are hazardous to human health, but PM 2.5 is associated with a higher proportion of health effects. Prolonged exposure to PM 2.5 can cause cardiovascular and respiratory problems. It has also been associated with an increase in lung cancer mortality risk. PM 2.5 causes 85,000 to 200,000 excess deaths per year in the U.S.

Although countries in Africa and South Asia bear the highest brunt of air pollution, the number of air sensors installed in these countries is still very low, said Raheja.

Currently, her research involves using low-cost sensors — such as PurpleAir and Clarity air quality sensors — to measure and understand PM 2.5 concentrations in sub-Saharan Africa. She’s part of a team at Lamont that is now trying to understand how well these sensors perform in those regions and what kind of air pollution levels are endemic in the communities. 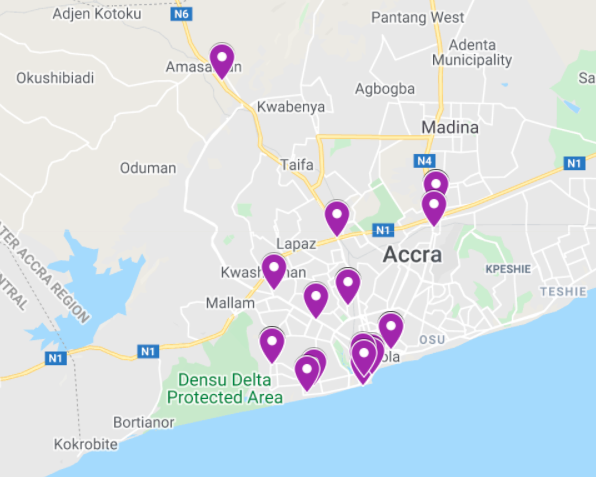 A map of the low-cost sensor network that the group has installed around Accra, Ghana.

“We are also looking into how pollution trends have changed based on community-led mitigation measures,” Raheja added.

In addition to this international research, Raheja is part of a large ongoing effort to analyze all the terabytes of data already recorded from air quality sensors in the U.S. So far, the data has suggested that emissions inventories in the U.S. are out of date — that there are two to 10 times more pollutants in the air than expected. “That is a really huge gap,” said Raheja. “A lot of work is focused on understanding where those gaps could be coming from.”

Another disturbing trend that the sensors confirm is that the burden of air pollution is not shared equally within the U.S. The reason? Historic redlining, or the discriminatory practice of denying financial resources and services to racially segregated, non-white neighborhoods.

Redlining was the practice of using red ink on maps to outline areas where Black populations live to “warn” mortgage lenders. Because of redlining, Black neighborhoods suffered from lower levels of investment as compared to white neighborhoods.

People of color breathe higher levels of air pollution because they are most likely to live close to factories, refineries, ports, and highways. Communities of color also have limited access to green space and healthcare.

“It is horrific how redlining policies that were set in motion almost 90 years ago are still impacting the lives of urban residents today,” said Raheja.

Even though historically redlined communities have installed fewer air quality sensors, perhaps due to limited resources, the sensor networks reveal that these trends are not only local but also nationwide. Historically redlined neighborhoods are experiencing the worst levels of air pollution in every single city in the U.S., from the West Coast to the East Coast, explained Raheja.

The top sources of PM 2.5 are industry, vehicles such as cars and trucks, construction, residential cooking, agriculture, and power plants. But as the impacts of climate change are intensifying every year, wildfires in the West Coast of the U.S. are a growing concern when it comes to air pollution.

“We are seeing wildfires policies in California failing as wildfires are getting worse every year. We don’t really know what we are doing, but a key misstep has been ignoring the wealth and depth of knowledge held by the Native communities, and their warnings,” said Raheja. “Indigenous communities have been advocating for the usage of prescribed burns. But local laws forbid these prescribed burns in a lot of areas in California.”

For a high school class that Raheja teaches, she has encouraged her students to design a study that takes Indigenous knowledge into consideration to come up with new policies for effective land management and wildfire prevention.

“To reduce air pollution and wildfires in California, we need a more widespread consideration, implementation, and inclusion of Native American land management practices, as well broader efforts towards the repatriation of land to these communities. While I’m currently delving into this through class projects with my high school students, I am hoping to apply for funding to transform this into full-sized research,” added Raheja. “This could have the potential for understanding and reducing air pollution across California, and especially in the hardest hit communities.”