What We Know About Medicanes 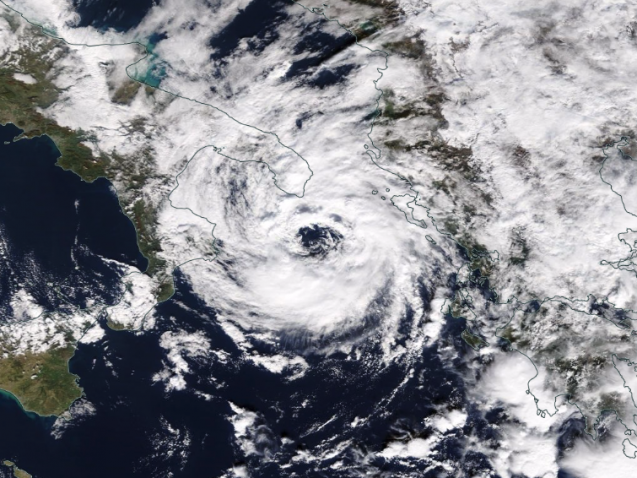 A rare type of storm struck Greece last week, killing at least 20 people and reportedly damaging 1,000 homes with flash floods and mudslides. Photos of the storm, named Numa, showed clouds swirling around a central eye. It’s the type of storm we’re accustomed to seeing in the tropical waters of the Atlantic and Pacific Oceans, perhaps leaving a trail of destruction through the Caribbean and Gulf of Mexico.

Medicanes (“Mediterranean” + “hurricanes”) are not common. Meteorologists estimate that they form once or twice a year, on average.

Is a Medicane Really a Hurricane?

Medicanes have a lot in common with tropical storms, with strong winds spinning around a core and torrential rainfall. In 2014, Medicane Qendresa hit Malta with sustained winds of up to 70 miles per hour and gusts of up to 95mph. Nevertheless, the waters of the Mediterranean aren’t extensive or warm enough to sustain the strength needed to call these storms legitimate hurricanes. In addition, says Yochanan Kushnir, who studies climate variability at Columbia’s Lamont-Doherty Earth Observatory, medicanes’ physics and dynamics are different from those of hurricanes. (More on that in the section below…)

How do They Form?

Mediterranean cyclones are most likely to occur in the autumn, peaking in winter, and slowing down in the springtime.

Like conventional hurricanes, they develop over warm waters. Whereas Atlantic or Pacific cyclones require temperatures of around 80 degrees Fahrenheit to grow, medicanes have been known to evolve in waters as cool as 57 degrees. Their formation depends on cool air above.

Hurricanes form around a warm core and move from east to west, says Kushnir, whereas medicanes have a cold core and travel from west to east. They start off like regular winter storms we might experience on the East Coast of the U.S., only smaller and less intense. But sometimes the storms begin to pull heat and moisture off the Mediterranean, thermodynamically converting those ingredients into energy, just like hurricanes do. An intense low-pressure system develops, says Kushnir, “which looks very much like a hurricane with clouds circling an eye-looking feature.” Steered by the westerly winds aloft, these storms move eastward.

The western part of the Mediterranean, between Spain and Sardinia, is one of two hotspots for medicane formation. The other area—in the Ionian sea, to the west of Greece—is where Numa formed.

Do Any Other Seas Have Hurricane-Like Storms?

Similar storms can form in the polar regions, including over the Labrador Sea and over the ocean just south of Greenland. “These are called polar lows and they look very much like medicanes,” says Kushnir.

How Does Climate Change Affect Medicanes?