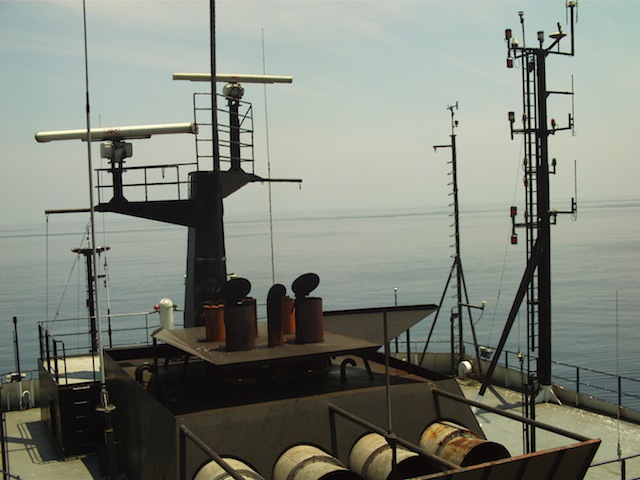 The R/V Marcus G. Langseth is equipped with a number of positioning systems used for navigational capabilities as well as survey calculations and data processing.  Knowing where the ship is and the data collected is extremely important for many reasons.

Vessel Positioning Reference Systems
All survey calculations will use the World Geodetic System 1984 datum (WGS84) UTM Zone (TBD at sea) projection.  The Global Positioning System (GPS) operates on the WGS84 datum. The vessel’s Differential GPS (dGPS) Reference Stations are defined in the WGS84 datum.
In order to obtain optimized navigation, waypoints need to be in decimal degrees (DD) to five (5) decimal points.  Decimal degrees express latitude and longitude geographic coordinates as decimal fractions and are used in many Geographic Information Systems (GIS), web mapping applications such as Google Maps, and GPS devices.  Negative numbers represent latitudes south of the equator and longitudes west of the Prime Meridian.
Example:  38.88972, -77.00888
The geodetic and projection parameters are detailed in the following tables:
Project geodetic parameters
Project Projection Parameters - Example (different based on the location of the cruise)
Gravity Tie Point
Per standard procedure, a gravity tie will be done before and after this cruise.
Positioning Reference Systems
Two independent standard multi-station dGPS systems are required for the survey.
Magnetic Declination
Magnetic declination is the angle between compass north (the direction the north end of a compass needle points) and true north (the axis around which the earth rotates). Magnetic north is determined by the earth's magnetic field and is not the same as true (or geographic) north. Depending on where you are on the earth, the angle of declination will be different - from some locations, the geographic and magnetic poles are aligned so declination is minimal, but from other spots, the angle between the two poles is pretty big.
Declination is calculated using the current International Geomagnetic Reference Field (IGRF) model. While results are typically accurate to 30 minutes of arc, users should be aware of several factors that can cause disturbances in the magnetic field.
The IGRF is a series of mathematical models of the Earth's main field and its annual rate of change (secular variation).
For every cruise, magnetic declination is computed based on the date and position using a magnetic field calculator.
‹ Cruise Schedule up Laboratory & Science Spaces ›