Cruise Dates: August 16 to August 26, to and from Astoria, Oregon.

Axial Seamount, an active underwater volcano on the Juan de Fuca Ridge off Oregon, erupted in 1998 and again last year. A long-term monitoring project called the New Millennium Observatory, or NeMo, was established in the mid-1990s and has involved sending remotely-operated vehicles to the seafloor during most years. Monitoring instruments including geophysical sensors such as hydrophones, bottom pressure and tilt recorders, temperature sensors and chemical sampling instruments.

NeMO and associated projects are collecting data to understand how hydrothermal ecosystems on undersea volcanoes evolve with volcanic eruption cycles.This cruise is a collaborative effort funded by the National Science Foundation, National Oceanic and Atmospheric Administration and the Gordon and Betty Moore Foundation. David Butterfield, with the University of Washington and NOAA's Pacific Marine Environmental Lab, is overseeing the chemistry and microbiology work at Axial Seamount. Microbiologist Jim Holden, of University of Massachusetts, Amherst, is onboard with funding from the Gordon and Betty Moore Foundation (GBMF). Julie Huber, of the Marine Biological Lab, is the lead scientist on this multi-investigator GBMF Marine Microbiology Initiative project. Geophysicist Glenn Sasagawa of University of California, San Diego, is funded by NSF to develop, test and deploy a self-calibrating, high-precision pressure sensor, capable of measuring tsunamis or small vertical ground motions over long periods.

In a related project, two optical communication instruments will be installed on borehole well heads under the CORK Optical Telemetry System (OTS)  program.  The first site will be CORK Hole 857D (48deg 26.571247'N 128deg 42.65207'W). At this site, after installation of the seafloor unit using ROV Jason, investigators will download
pressure data from the CORK.  Following recovery of Jason, they will carry out a series of communication tests between the seafloor optical device and a ship-based lowered CTD instrument.  If testing goes well, they will leave the unit in place and recover it next year, in 2013.  The second seafloor optical communication unit will be installed at seafloor CORK Hole 1025C(47deg 53.2470'N 128deg 38.9190'W). Investigators will install a new CORK data
logger along with the seafloor optical unit.  Again, following recovery of Jason, they will test the installed unit and leave it on the seafloor for a year. The project will involve Earl Davis of Pacific Geoscience Center in British Columbia, and Keir Becker of the University of Miami.

Traveling to and from Axial Seamount, investigators will deploy six surface oceanographic drifters on the western side of the Endeavour Ridge segment. Norm Farr and Jon Ware will use a Jason dive to test their High Speed Optical communications by transmitting live realtime video between
Jason and Medea). 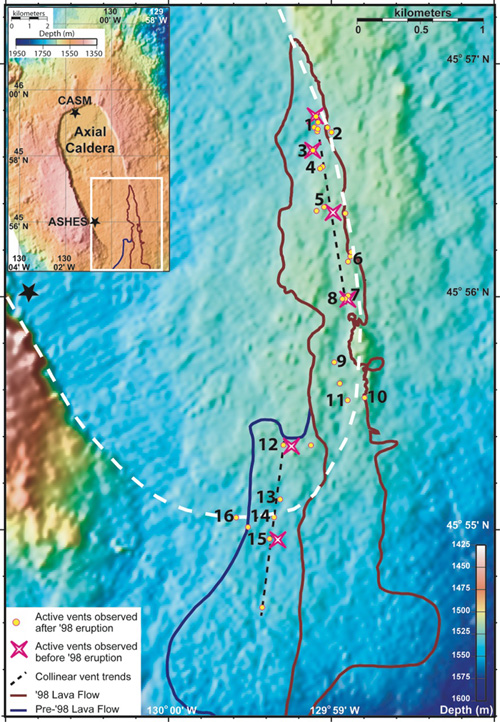