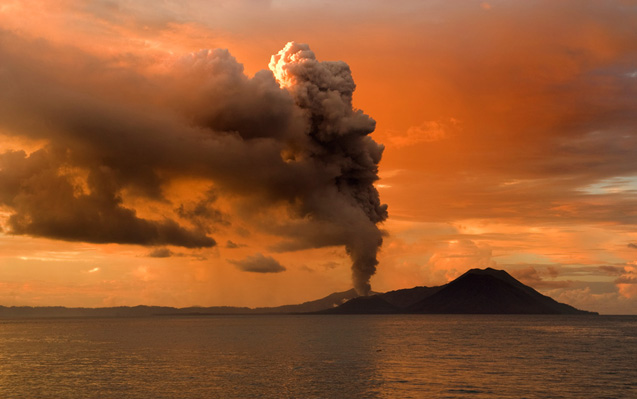 When Mount Tambora erupted in 1815, it spewed dust and sulfate aerosols into the stratosphere with a force more powerful than any eruption since.  As the aerosols and particulates circulated around the globe, they cooled the planet, disrupting agriculture and leading to what became known as the “year without a summer.”

Scientists can read old descriptions of eruptions like Tambora and analyze ash deposits captured in polar ice, but consistently estimating the climate impact of past eruptions has been difficult. A new technique may be changing that.

An innovative new method described this week in the Journal of Economic Surveys combines statistical approaches used in economics with volcano and climate science, with the intention of ultimately picking out past volcanic eruptions from tree-ring temperature reconstructions going back millennia and gauging their impact on the climate. It arose from a chance meeting at a conference between climate scientist Jason Smerdon, who was working with graduate student Lea Schneider on the volcanic impact on climate, and econometrics expert Felix Pretis.

The new statistical method resulting from their cross-disciplinary collaboration may help separate volcanic impacts on climate from random climate variability and improve understanding of the effects of aerosols on temperature, which has implications for pollution control as well as for calibrating climate models. The method also has a wide range of policy and science applications beyond volcanic eruptions, from assessing forecasts made by central banks to studying the diffusion of innovations in medicine, said Pretis, co-director of the Climate Econometrics research project at the Economics Department of the University of Oxford.

The method starts with a temperature time series. “In a climate time series, you often have lots of ups and downs and wiggles. Often times, you would like to sweep over that time series to identify things that don’t match what you would expect—breaks that stand out against the background wiggles as statistically significant. Maybe it’s a break that goes up to a different mean. Maybe it’s a volcanic spike,” said Smerdon, a Lamont associate research professor at Columbia University’s Lamont-Doherty Earth Observatory and head of the PaleoDynamics Lab there. 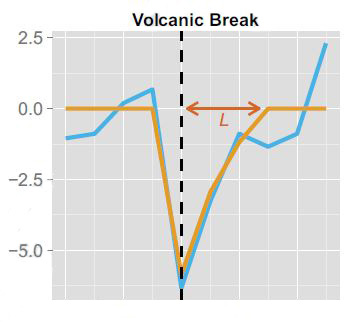 Example of the signature of a volcanic break. Image: Pretis et al., 2016

The new method uses what is known as indicator saturation. In a nutshell, the approach defines the basic shapes of possible breaks that might be in the time series and then removes all the additional wiggles except for those that resemble the signature shape in a statistically significant way. The size of the v, or the magnitude of the cold spike in the temperature time series, is related to the impact of the eruption on the climate and ultimately the eruption’s size and location.

To test the approach, the scientists used a Northern Hemisphere mean temperature time series from a global climate model simulation spanning the last 1,200 years. These simulations are developed by modeling the many forces that cause climate to change, including internal random variability and external forces, such as solar variability, greenhouse gases and volcanic eruptions. The method identified the biggest eruptions in the climate model 100 percent of the time over many trials. It consistently detected 74 percent of eruptions that deposited over 20 teragrams of sulfate aerosols on the polar ice, and 57 percent of all global eruptions, including several with little impact on Northern Hemisphere temperature.

Smerdon, Pretis and Schneider, a Ph.D. student at Johannes Gutenberg University, Mainz, Germany, are now working on applying the method to a new temperature time series developed from tree-ring density records from across the Northern Hemisphere. The result may help pinpoint previously unknown volcanic eruptions and gauge their magnitude.

“This is a much more rigorous way of testing your assumptions than looking at a time series and saying, ‘Well, I think something happened here.’ Sometimes it’s obvious, but statistics allows you to ask those questions objectively to make sure that you aren’t deceiving yourself,” Smerdon said.

The method can be used to learn about previously unknown or uncertain events in general, Pretis said. “These methods also allow us to improve forecasts once a shock has happened—sudden unanticipated shifts can lead to dramatic forecast failure, because most forecasting models correct back to the level prior to the shift. We can use the methodology of designed break functions to improve our forecasts by detecting if a break has occurred, even with only a few data points, then estimate the magnitude of this break to provide guidance on how we might recover from it.”

Example of a Northern Hemisphere temperature reconstruction through the year 2000 showing departures from the 1960-1991 average. The new statistical method may help determine when volcanoes erupted. Image: Schneider et al., 2015

NASA-GISS’s Allegra LeGrande, who studies the impact of volcanic aerosols on climate and was not involved in the paper, said: “If a technique existed to automatically pick out all the volcanic events from proxy records, we would be able to significantly improve our reconstructions of past volcanism and extend this reconstruction far back in time. We could develop better statistics for the frequency of large events.” LeGrande is co-hosting a workshop on Volcanic Impacts on Climate and Society in June.

The new statistical tools are available through the software package OxMetrics and in the open-source statistical software environment R, accessible through climateeconometrics.org/tools. David Hendry, co-director of the Program for Economic Modelling at the Institute for New Economic Thinking, Oxford Martin School, was a co-author of the paper.