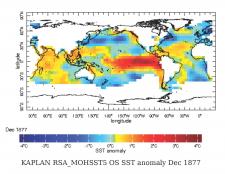 Reduced Space Optimal Analysis for Historical Datasets: from 1856 to present is available. This analysis uses present-day temperature patterns to enhance the meager data available in the past.

Reduced Space Optimal Estimation has been applied to the global sea surface temperature (SST) record MOHSST5 (ATLAS7) from the U.K. Meteorological Office to produce 136 years of analyzed global SST anomalies (with regards to normals of 1951-1980) , where data gaps are removed and sampling errors are diminished. The results of this analysis are available as a dataset, including an interactive viewer and downloadable data files. This analysis is described in the paper

The dataset contains results of all 5 stages of the analysis: projection, Optimal Interpolation (OI), Kalman Filter (KF) forecast, KF analysis, and Optimal Smoother (OS). Each stage gives the estimate of the field and corresponding theoretical error estimate. The projection gives the poorest results: it creates large spurious anomalies in the areas where no observations were available. The OI regularizes the solution and suppress such anomalies. The KF forecast is what Markov model (MM) of time transitions predicts a month ahead, which is a weak field with a possibly wrong structure. The KF analysis is much better: it is an improvement over the OI in that it uses MM to provide propagation of information forward in time. The Optimal Smoother (OS) provides further improvement by using MM in both directions in time. The use of OS is recommended for all practical applications .

In the process of analysis we use information on number of observations for every gridbox. Since it is not a part of MOHSST5, we took its 1x1 version from MOHSST6, averaged it on 5x5 with capping it by maximum of 60 monthly observations per 1x1 box. The resulting coverage fields are put into this dataset.

The input data (the MOHSST5 version of the GOSTA dataset) from the U.K. Meteorological Office on which the analysis was based can be obtained from the U.K. Hadley Centre or from a link here.

The 1951-1980 normals with regards to which the anomalies were computed can be accessed here. These fields need to be added to the analyzed (e.g. OS) anomalies in order to produce the corresponding analyzed values of the total SSTs.

Note also the availability of the extended version of the OS SST by the NCEP OI analysis:

The link to the SST fields from the current extended version (v2) is here.

For 1856-1981 this is the analysis of Kaplan et al. [1998] which uses optimal estimation in the space of 80 empirical orthogonal functions (EOFs) in order to interpolate ship observations of the U.K. Met Office database [Parker et al. 1994]. The data after 1981 reperesents the projection of the NCEP OI analysis (which combines ship observations with remote sensing data) by Reynolds and Smith [1994] on the same set of 80 EOFs as used in Kaplan et al. [1998] in order to provide enhanced data quality of the former in the spatial resolution of the latter.

v1 and v2 correspond to the different versions of Reynolds and Smith, v2 being the current version (v1 has been discontinued; v1-based historical SST extension is provided here for the completeness only).

The base period used for the anomalies is 1951-1980. Climatological fields ("climate normals") with regards to which these anomalies were computed are those of the U.K. Met Office ATLAS7 GOSTA climatology, available here

IMPORTANT: If you do not care about statistical homogeneity of the long (starting pre-1981) SST records, and just need SST data after 1981, please use the original NCEP OI data from Reynolds and Smith (v.2). It is much better (1x1 degree resolution weekly based) SST analysis, which was degraded in the present product.