Structure And Evolution Of The Oceanic Lithosphere / Asthenosphere System 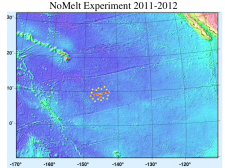 What is a plate?  This question is central to our understanding of global geodynamics and plate tectonics, but our knowledge of basic lithospheric properties in even very simple geological regions is poor.  In December, 2011, we will initiate a comprehensive data-collection and analysis effort designed to significantly advance our understanding of the structure and evolution of oceanic plates.  Using the research vessel R/V Marcus G. Langseth, we will combine an active-source seismic refraction experiment, a passive-source broadband ocean-bottom seismometer (BB OBS) deployment, and a seafloor magneto-telluric (MT) experiment to characterize a swath of mature Pacific lithosphere (Figure) in unprecedented detail.

Scientific Overview
Recent advances in laboratory measurements and theoretical models of the seismic properties of mantle rocks predict seismic velocity profiles for mature oceanic lithosphere that are fundamentally inconsistent with the best observations of seismic velocities, in two important ways.  First, the theoretical models consistently display negative velocity gradients with depth in the lithosphere, while observed velocity profiles have positive gradients.  Second, the theoretical models predict a lithosphere-to-asthenosphere transition that is thermally controlled, and at old ages, this transition is much deeper and broader than the transition that is observed seismically.  These inconsistencies suggest that non-thermal factors such as bulk composition, mineral fabric, grain size, dehydration, and the presence of partial melt play important roles in controlling the formation of the lithosphere. There is little consensus on which of these factors are dominant, in part because observations of detailed lithosphere structure are limited.
Dubbed NoMELT, our experiment targets two questions: (1) What factors control the velocity structure of the lithosphere?, and (2) What is the origin of the boundary at 70-80 km depth and does it define the base of the lithosphere?  We hypothesize that these features are fundamentally controlled by melting processes near mid-ocean ridges that produce  lithosphere that is impregnated with a residual basalt (gabbro) component and has a sharp dehydration/hydration boundary at its base.  An integrated analysis of the refraction, receiver-function, surface-wave, and MT data will enable us to distinguish these hypotheses from alternative models of lithospheric evolution, including serpentinization of the lithosphere and partial melting in the asthenosphere.
This project is a collaboration between LDEO (Jim Gaherty, PI), WHOI (Dan Lizarralde, John Collins, and Rob Evans, PIs), and Brown University (Greg Hirth, PI).  Funding provided by the US National Science Foundation's Marine Geology and Geophysics Program.
Faculty, Scientists, and Staff:
James Gaherty
Tags:
Broadband Seismology
Geodynamics
Marine Seismology
Plate Tectonics
ocean-bottom seismology